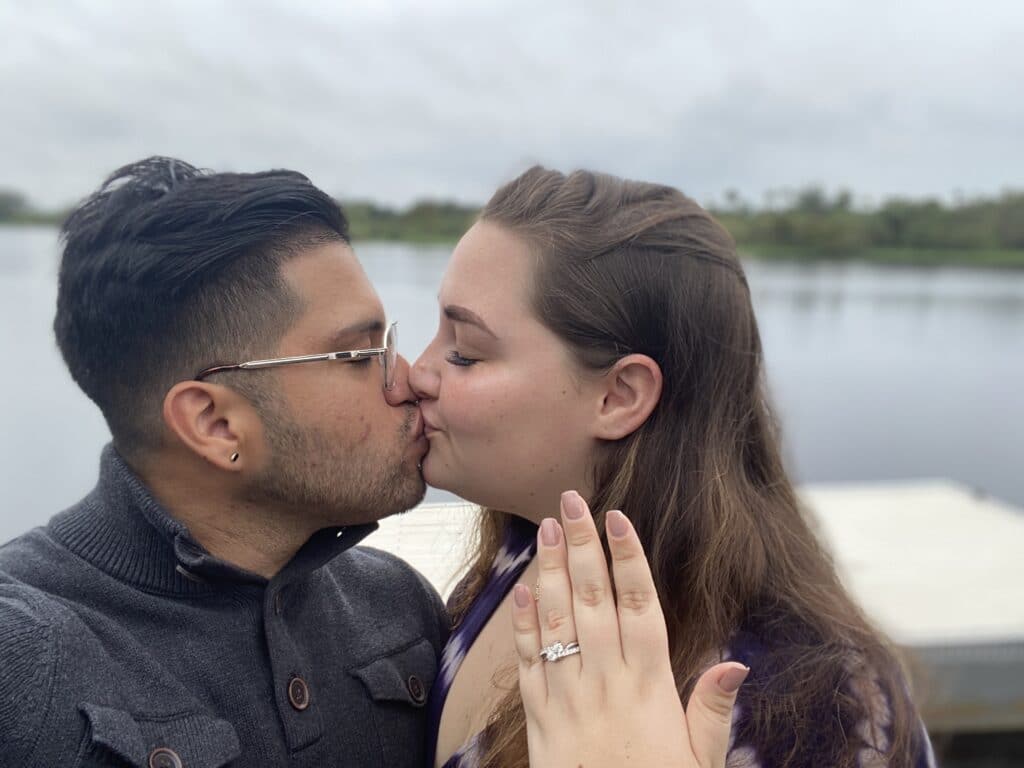 We love a unique marriage proposal story, don’t you? The bride to be Becky is on our team here at Wedding Venue Map! We are so excited to feature her and Richy’s monopoly marriage proposal as a way to kick-off our Becky the intern gets married series. 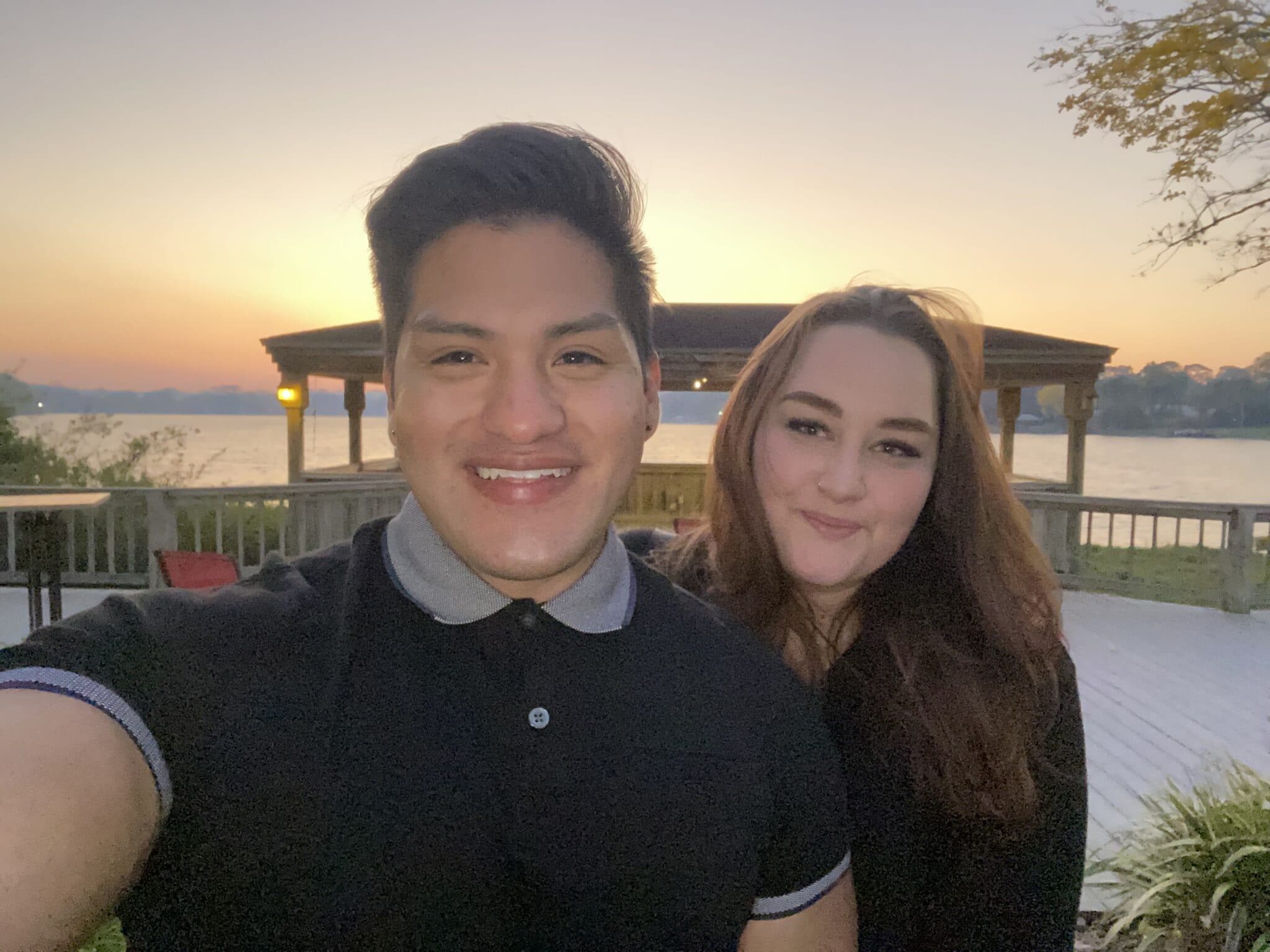 We met online about two and a half years ago. The first few days we text back and forth, eventually, he asked me to come over for a movie night. I’ll never forget that day he asked me if I wanted to watch a Disney movie or a chick flick and I was so excited that out of all the movie categories he gave me two of my favorite.

When we finally met in person it was like we had known each other for so much longer, I was so comfortable to be my complete self around him. Within two months he quickly became my comfort and my happy place, we spent multiple days a week with each other and talked for countless hours about everything imaginable. 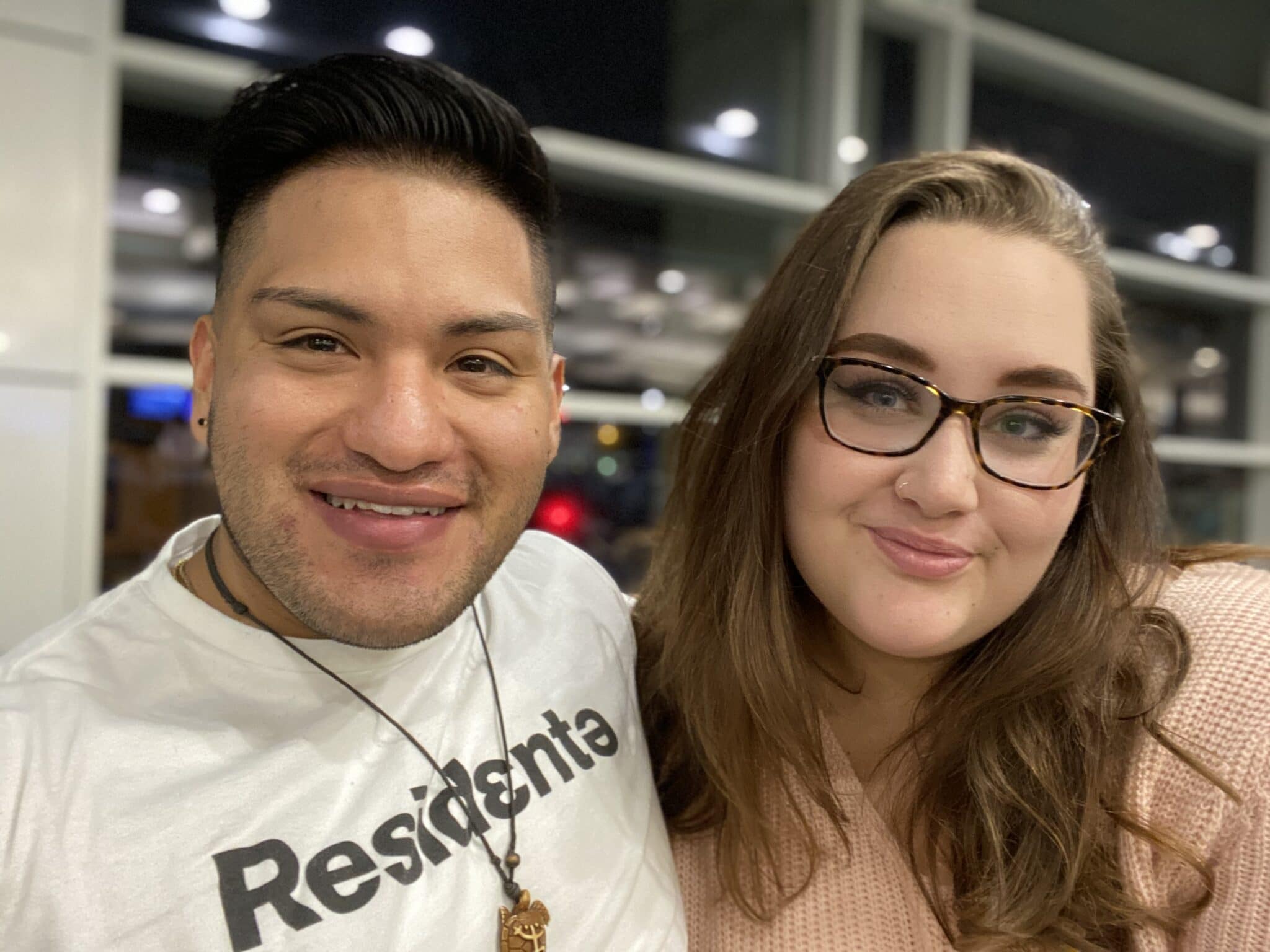 Some of our favorite things to do as a couple include trying new things and exploring new places. We love going on date nights at new restaurants (specifically trying new Ramen places wherever we travel), arcades, the beach, casinos, or really anywhere we can think of that we’ve never been to. 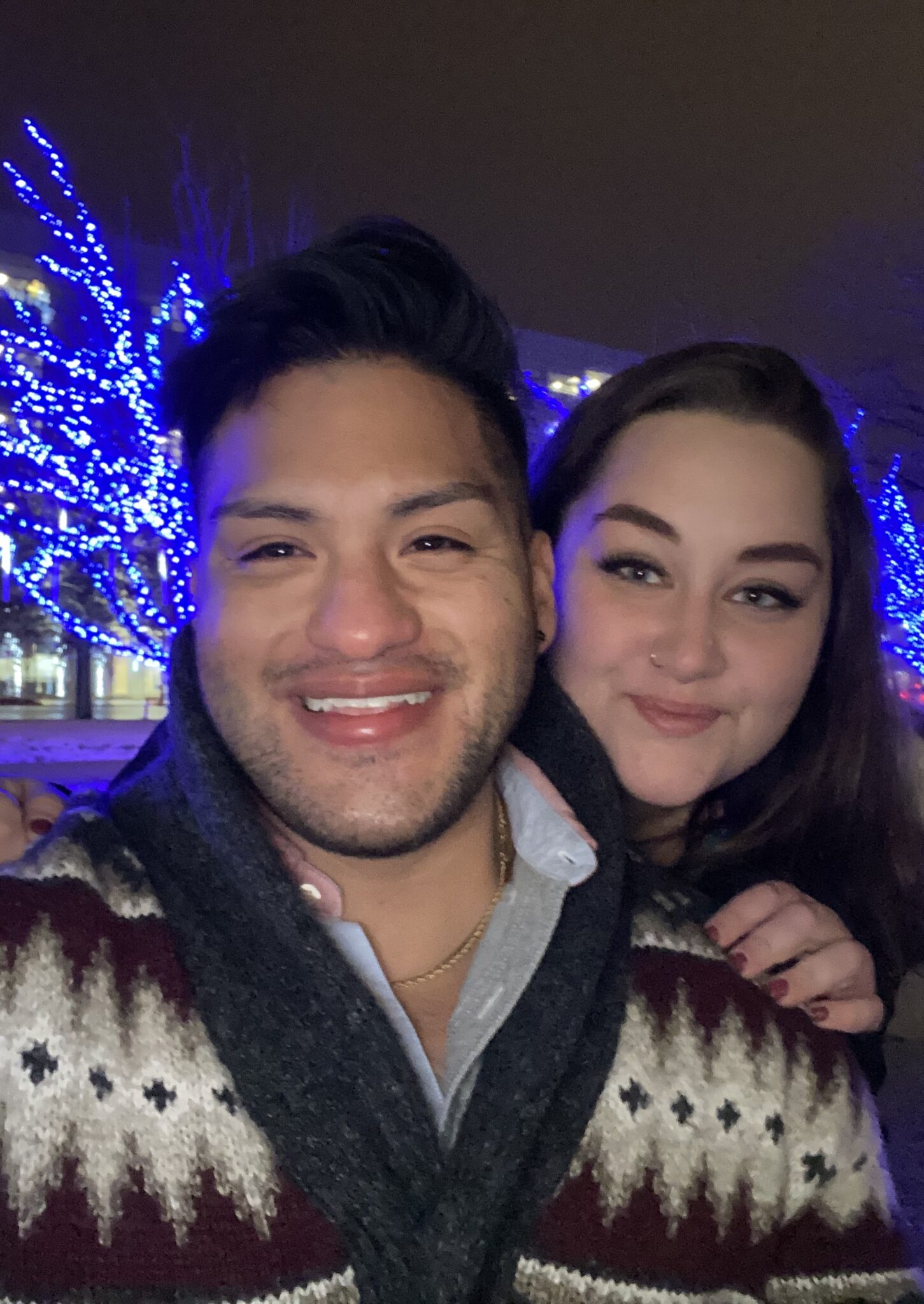 We love getting to travel to new places as a couple also, so far we’ve been to North Carolina, Puerto Rico, St. Kitts, Ohio, St. Maarten, and Grand Turk. While we love traveling we also love getting to do more laid-back things such as watching Netflix or playing board games and cards with just each other or our families. 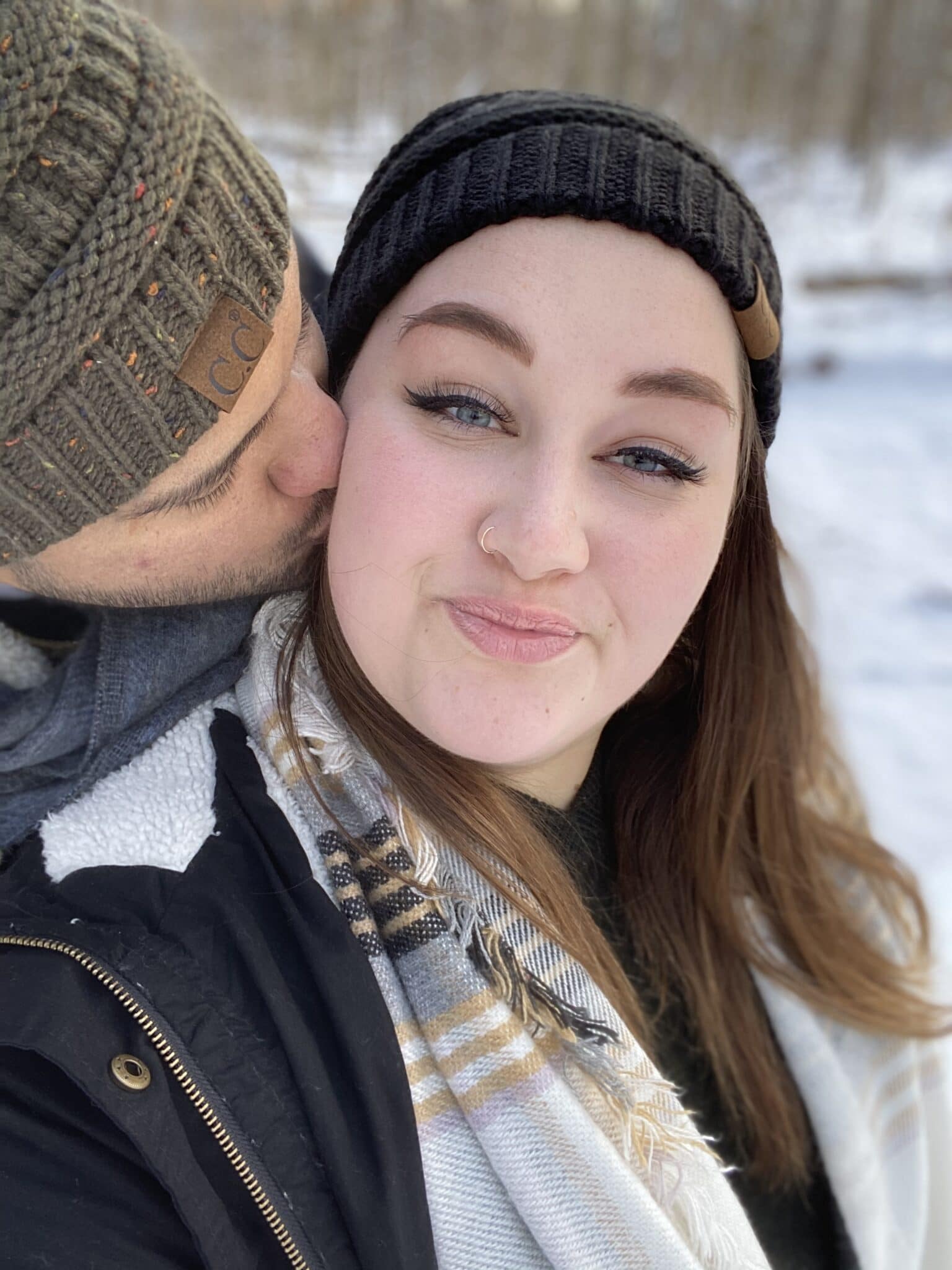 In general, we like doing all kinds of things both adventurous and everyday activities together.

Before getting engaged, we were officially together for a year and a half almost exactly. But we acted like a couple almost since we met over two years ago, he just wasn’t willing to admit we were more than friends at the time. 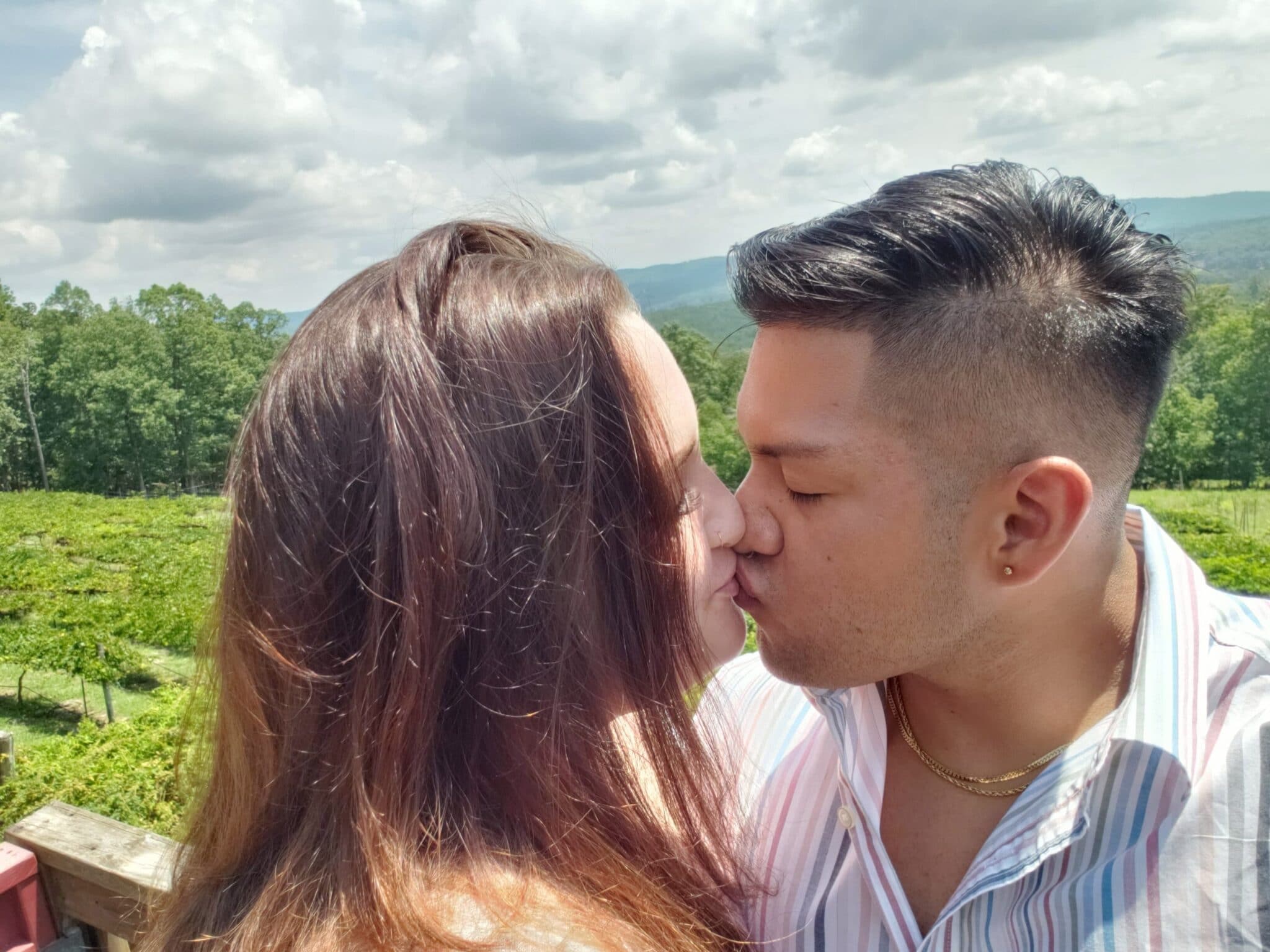 Did anyone help with the monopoly marriage proposal?

Both of our families helped create the proposal beforehand and helped him the day he proposed!

Originally he had planned a hot air balloon ride where he wanted to have our entire family and friends waiting for us when we landed with rose petals and candles set up. However, that plan didn’t work out when they told him they couldn’t guarantee they’d land in one specific area because of the wind direction.

He realized he needed to figure out something else so he reached out to my family to work together and make a homemade Monopoly board, which is my favorite board game. Not only did he make it with my family but he included his parents, my grandma, mom, uncle, aunt, and cousins. His parents and he made the board frame with wood and the engraving of each of the spaces.

My mom and grandma worked to paint each space with custom pictures that represent each of them. With spaces that were for my childhood home and his, places we went on multiple vacations, and places we hope to go in the future. My cousins worked to make a custom chance and community chest cards. He then asked my uncle to help him create a secret ring compartment in the luxury tax spot. 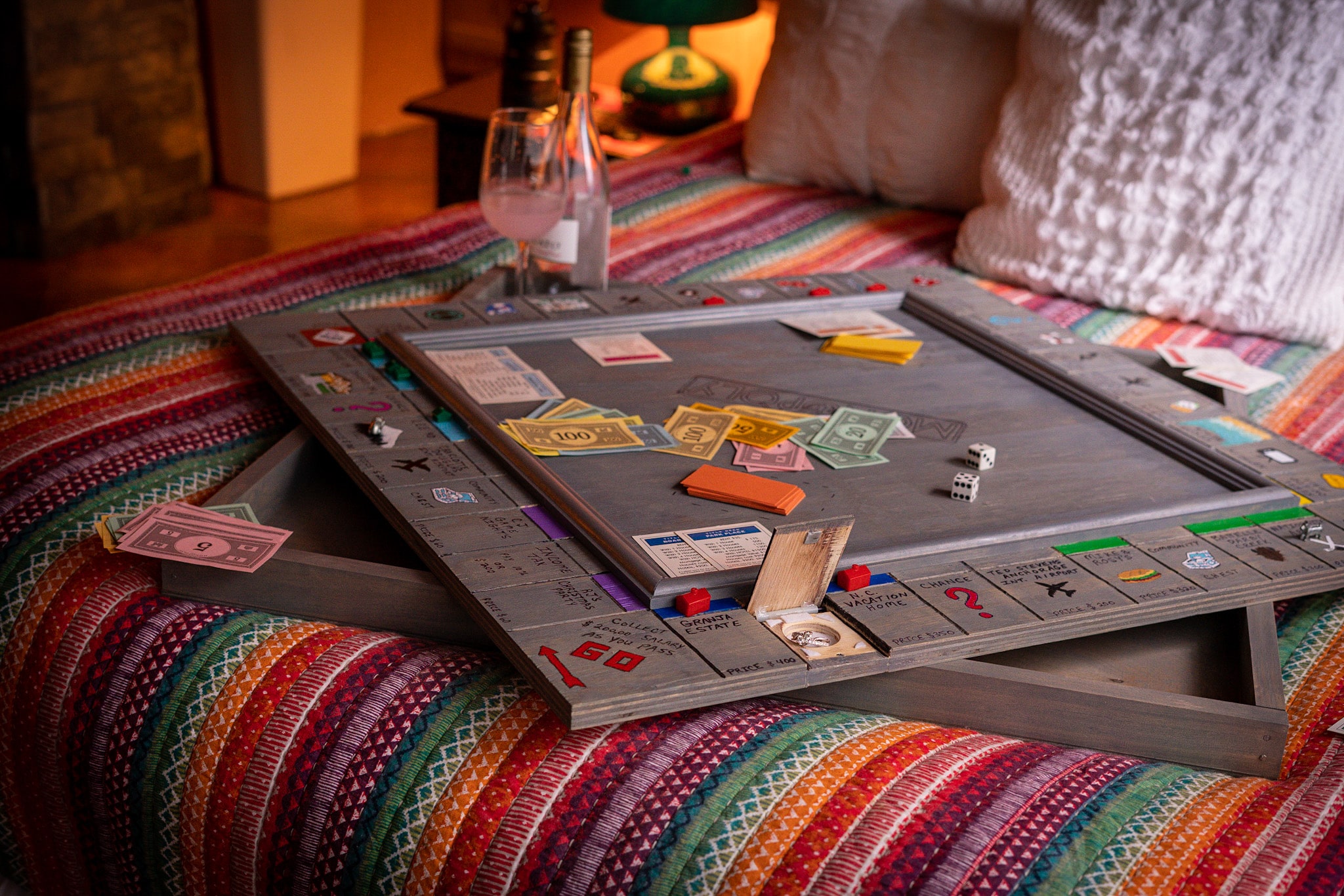 The weekend of his birthday, I had decided to plan a small getaway to a local AirBnB and wedding venue, Cedar Knoll, where I was planning to take him to see the Highlander cows on their property, which he had been obsessed with for over a year. When I brought it up to him, he told me we couldn’t go Friday because he had already booked a hot air balloon ride to do with me because it had always been on his bucket list.

Even though I’m scared of heights and the idea terrified me, I agreed because it was for his birthday. Then his family started to make plans to celebrate his birthday, with both of our families and some of his close friends, at their house that same day but earlier. The day of his birthday came and he told me that the hot air balloon company had emailed him to tell him it was canceled, I thought that was strange to cancel so soon before but thought maybe it was just because of the weather.

That Friday came and I went over early to help set everything up and spend some extra time with him, we got ready, and then our family and his friends started to arrive. About an hour after most of the people we invited had arrived, I noticed some of his family carrying something large into the living room and headed inside to see what they were doing.

When I got inside they had set out a giant homemade Monopoly board and I went to go look at it, I was super confused looking at all of the personalized spaces that represented us both together and separately because I assumed it was his birthday present from his family. But they told us it was for both of us and we all decided to play with almost 15 people sitting around the board watching and playing the game. 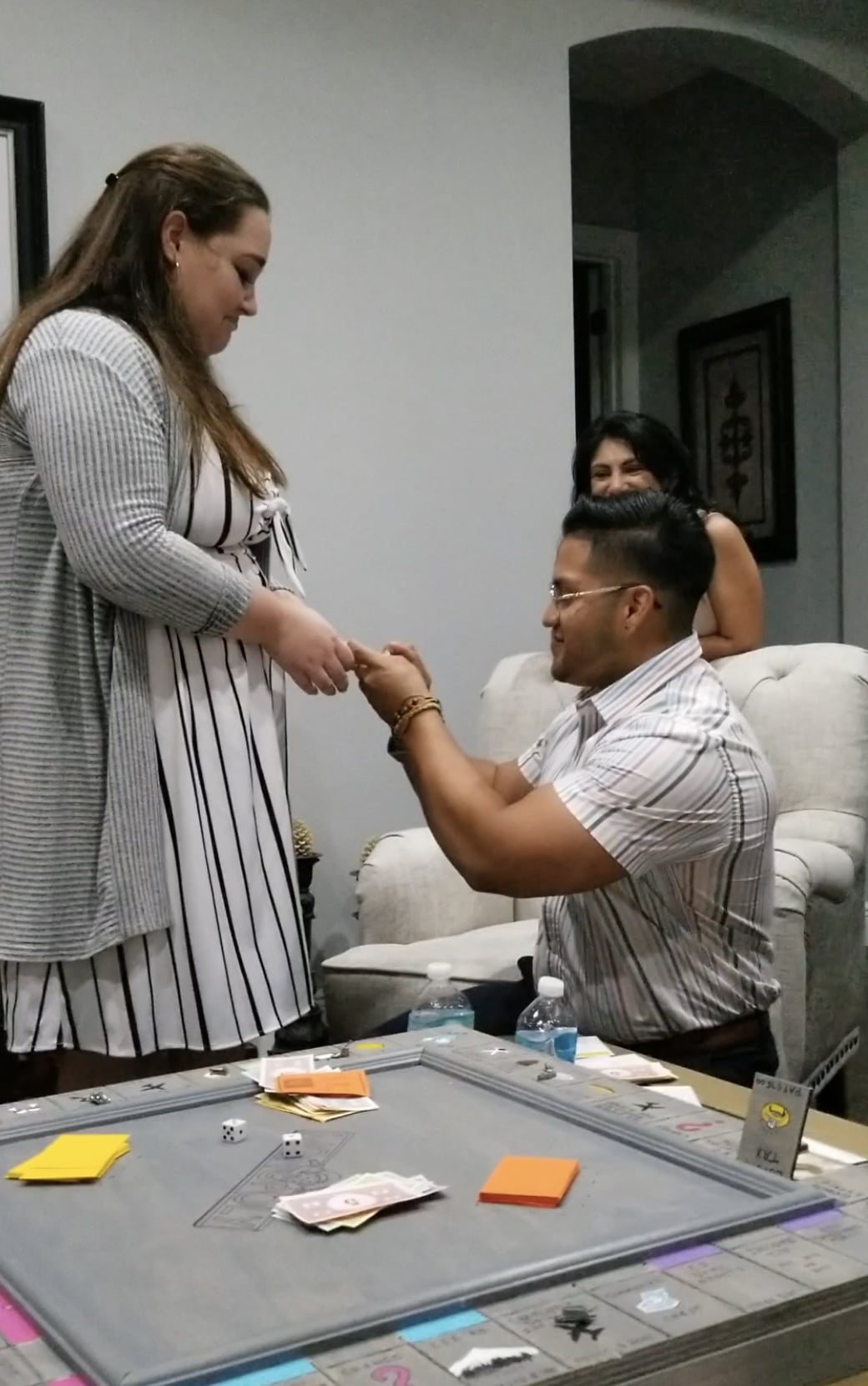 It turned into a longer game than expected with more of his friends arriving later. We kept playing though and eventually after everyone had arrived we got settled and got into playing.

When it came to my turn I had rolled doubles and was able to take a second turn when I landed on luxury tax, as I was pulling out my money to pay the tax he slid a chance card onto my lap. Without even looking at it I turned to him and asked why he gave that to me when I wasn’t on chance. He told me to read the card and when I did it read “Will you marry me?” with a picture of a ring next to it.

In the blink of an eye, he took the ring from the hidden compartment on the board and got down on one knee in front of our families and friends and told me he wanted to spend the rest of his life with me, then asked if I would marry him. Of course, I said “yes” and he put my gorgeous ring on. The rest of the night we spent with all of our loved ones celebrating our engagement and his birthday. 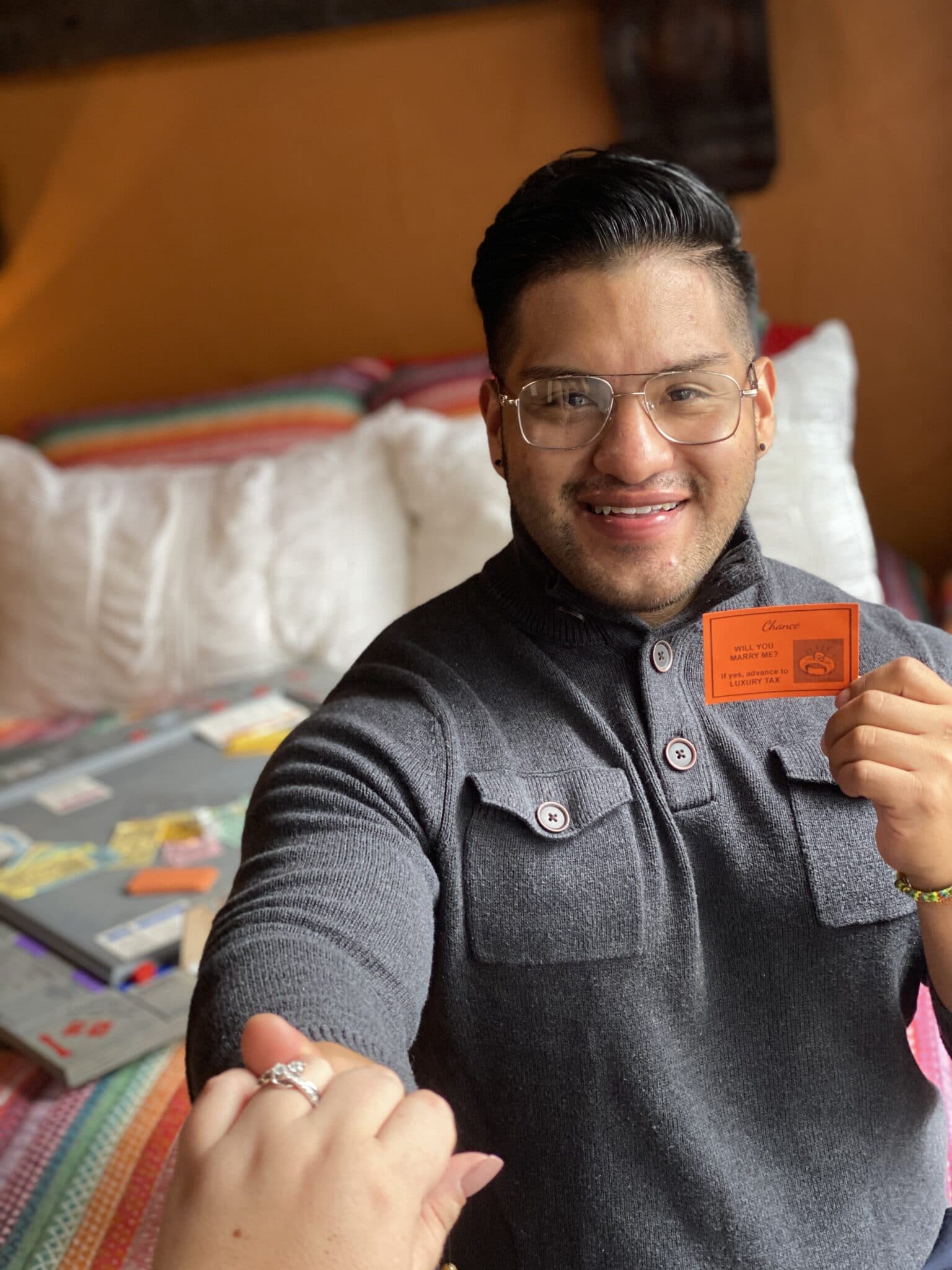 Later that night, since it was still a celebration of his birthday, we realized he hadn’t opened any of his presents. When he got to one of my presents for him, he opened it to find the Super Mario Brothers monopoly!

We both got a monopoly that day and I got engaged to my best friend!

He would say the best moment of the proposal was seeing all that hard work, coming down to the last second, seeing me so shocked, and having all of our loved ones there to celebrate with. For me, the best moment was when he handed me the chance card, being so confused the entire game wondering why his family had built us both a present for his birthday, but then realizing at that moment that he had created such a thoughtful gift as a way to ask me to spend the rest of our lives together.

The entire day was so special getting to celebrate his birthday and our engagement with all of our loved ones there to share that moment with. 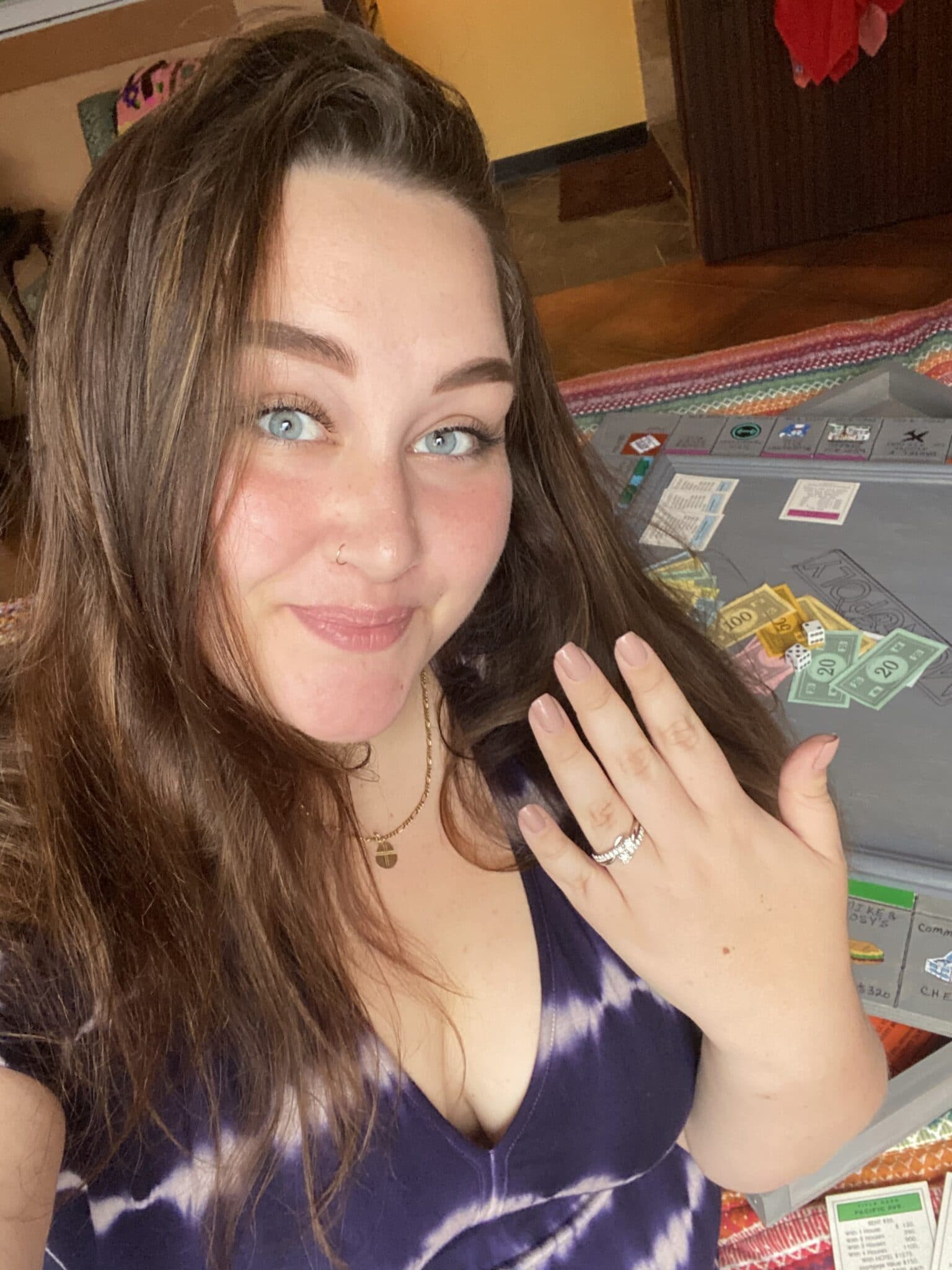 Since all of our family was already there, the first person I told was my childhood best friend back in Ohio.

It’s absolutely stunning, I love getting to wear something so unique and beautiful as a piece of our love story every day. The ring is from Kay Jewelers, it’s a part of the Ever Us collection. 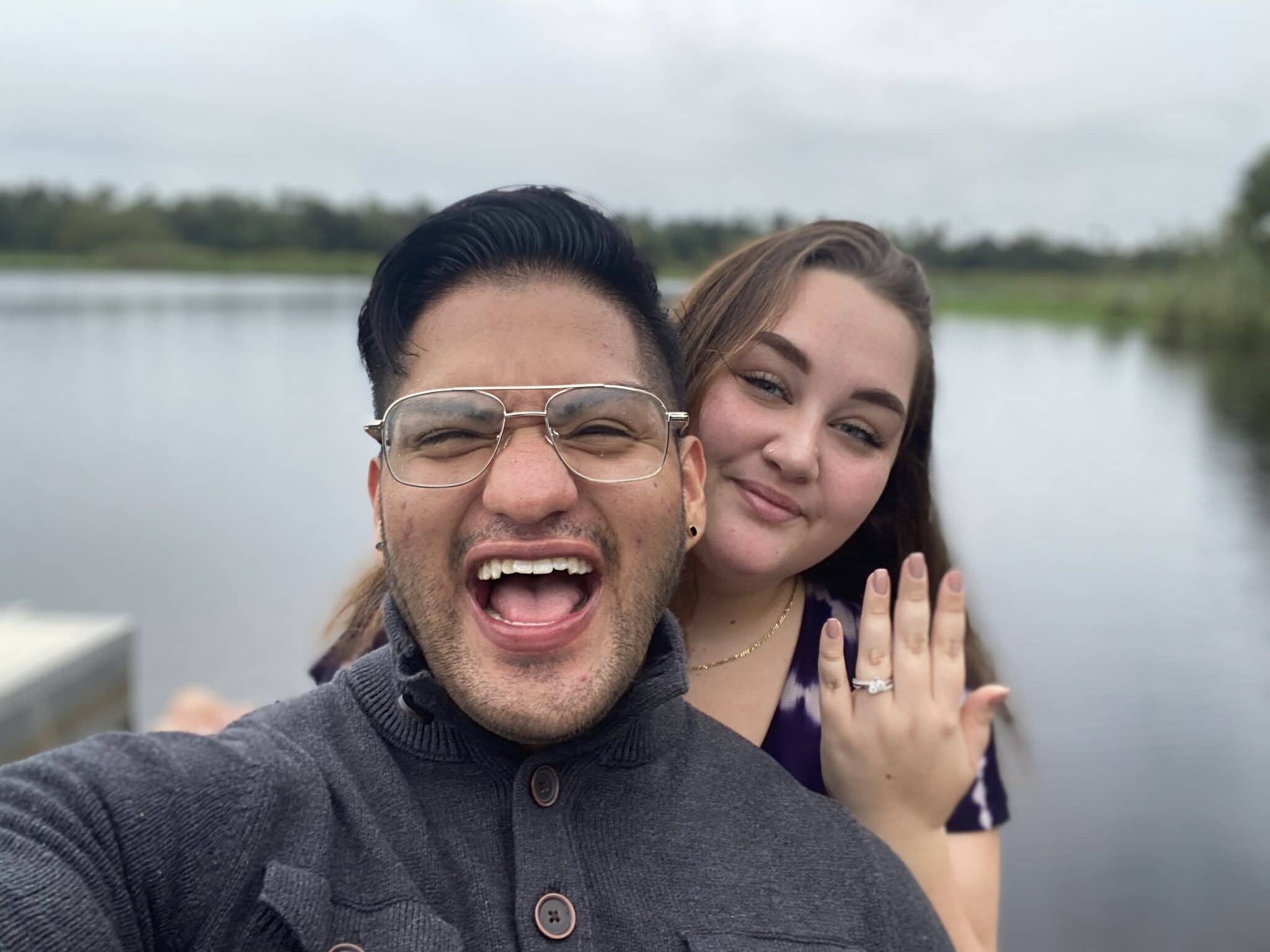 Right now, the part we’re most excited about is putting together some special gifts and proposal boxes for our groomsmen and bridesmaids to ask them to be a part of our wedding.

Really overall the whole planning process is so exciting, each step of the way there’s something new to get more excited about while we combine both of our visions to create such a special day that’s focused on the love we share.

We’re planning to get married in January or February of 2022.

We haven’t picked a venue yet but have tours scheduled at Bella Collina, Tavares Pavilion on the Lake, Bella Cosa Lakeside, Cypress Grove Estate House, and Luxmore Grande Estate. 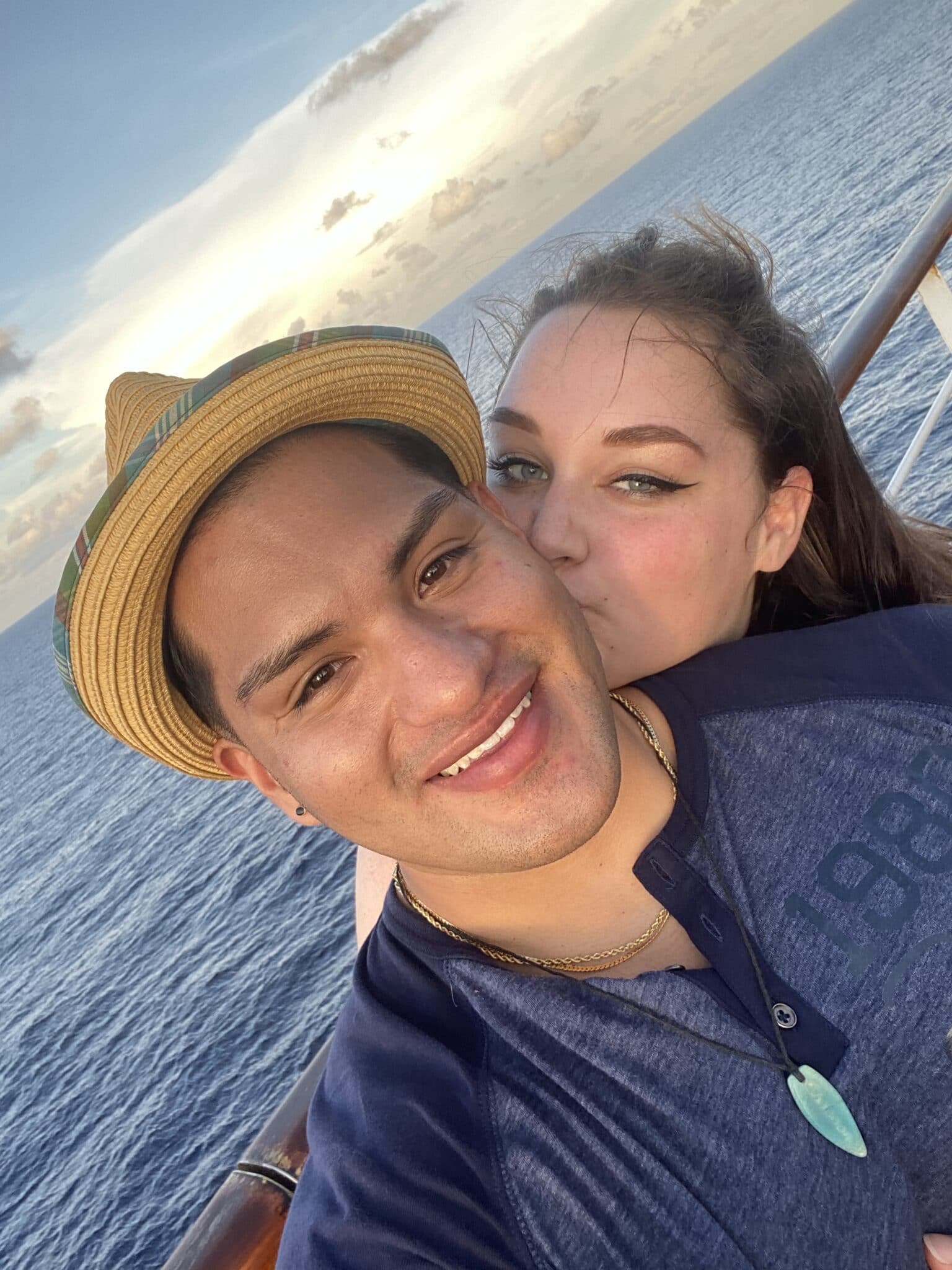