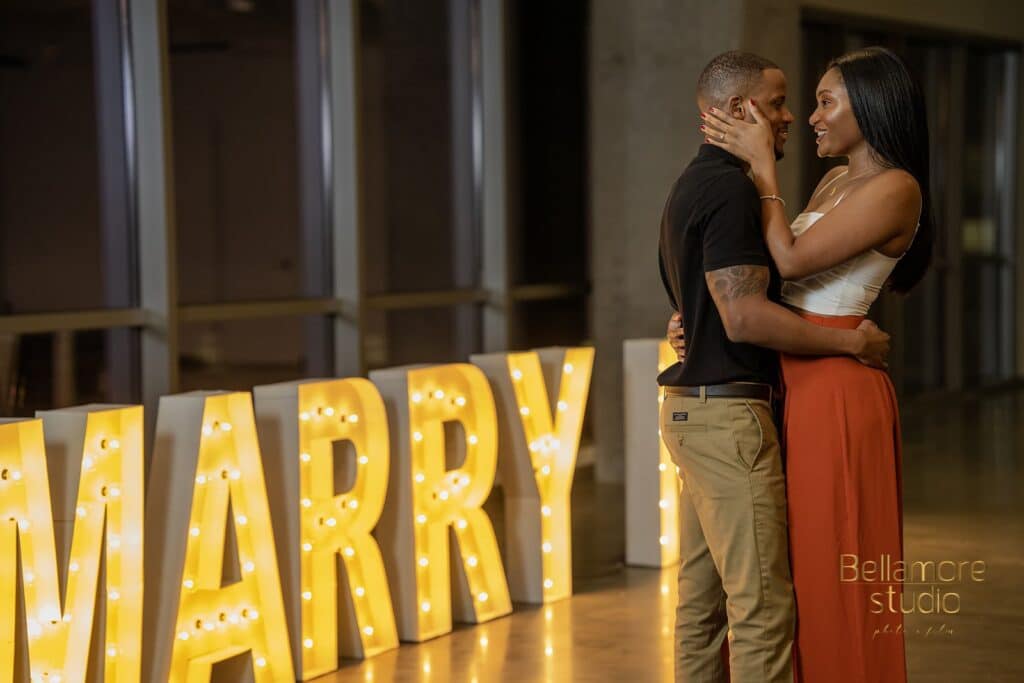 We love a great downtown proposal story, don’t you? When we saw these amazing engagement photos by Bellamore Studio, we knew that we wanted to feature Alexis & Rashad’s Downtown Orlando marriage proposal story.

We first met each other in 2018 when we were both, ironically enough, at another couples’ engagement proposal. We had never met each other but were both there supporting them, not knowing that we would have a future and eventually be engaged as well. 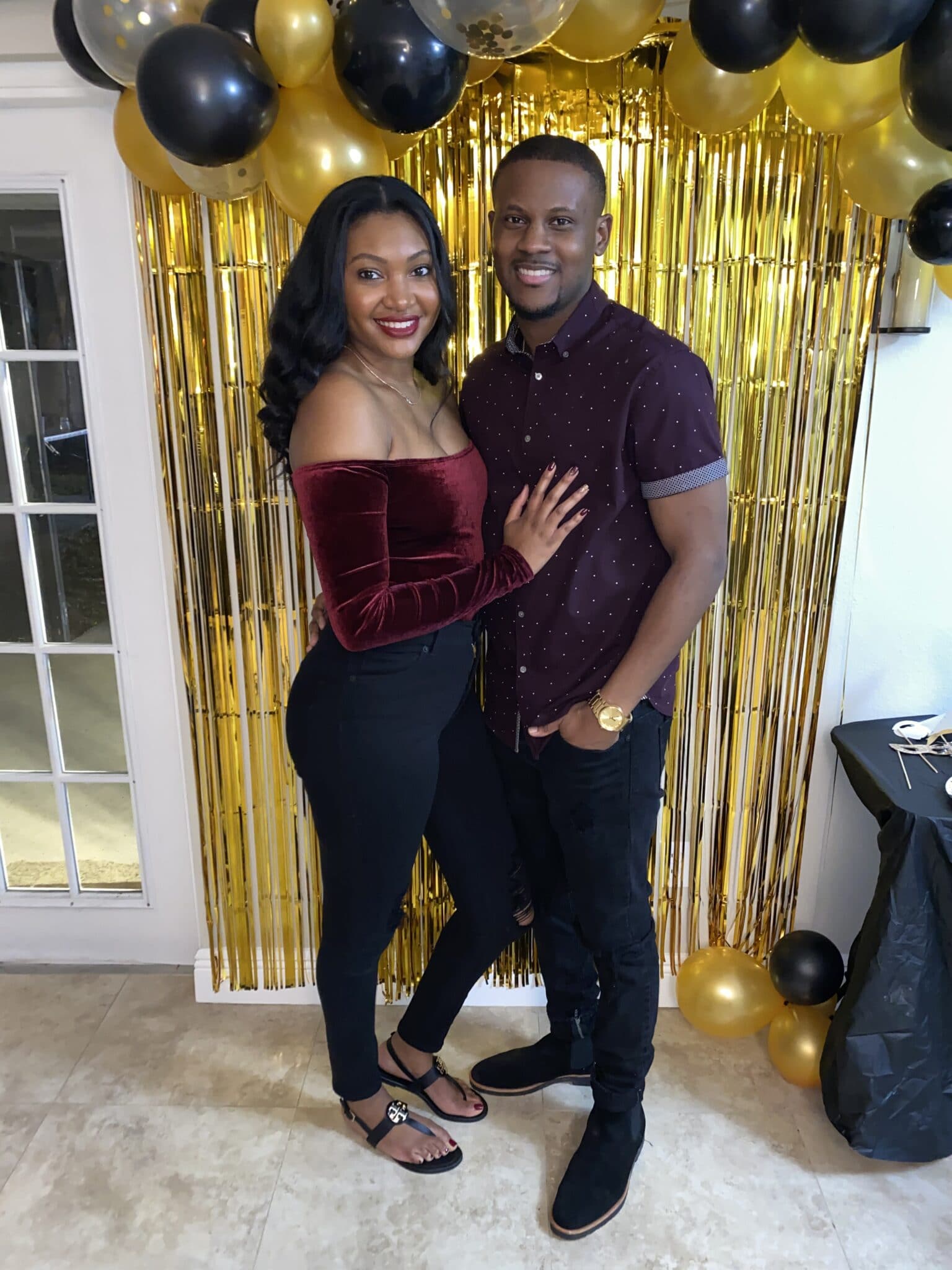 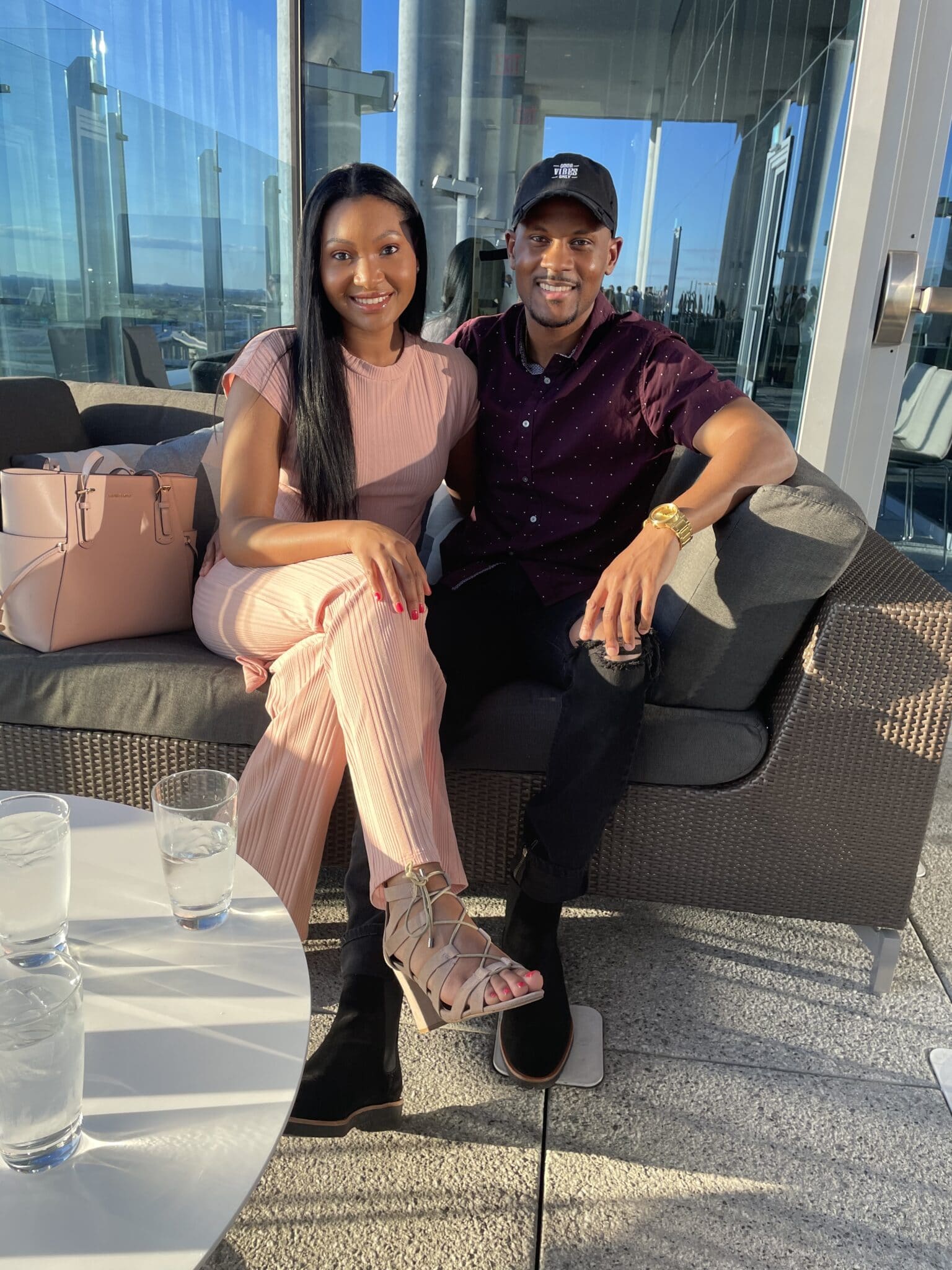 Our favorite things to do are binge-watching all of the common shows we like, lunch/dinner dates, hanging out with other couples, going to games, concerts, and amusement parks. 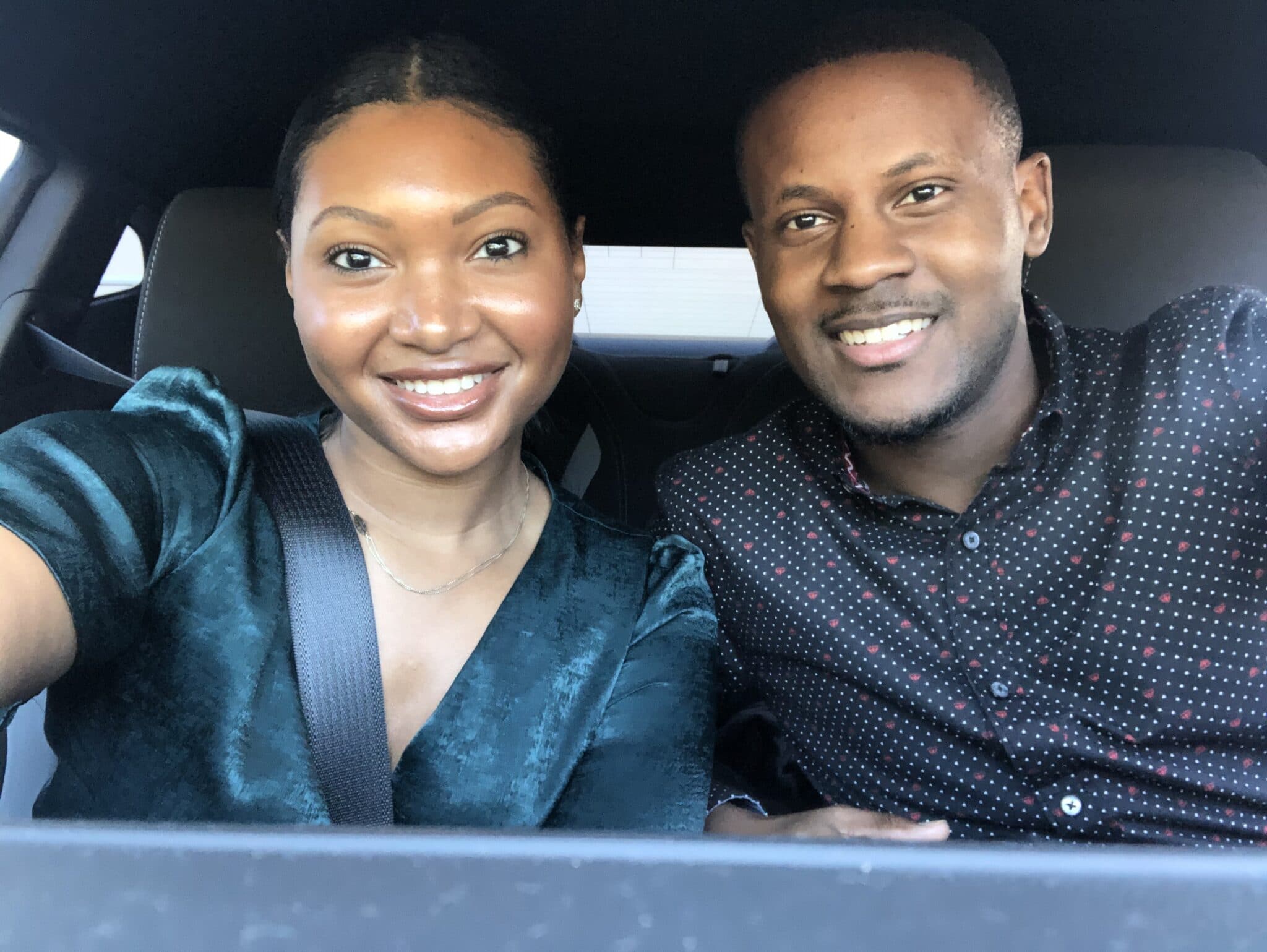 We were together for 3 years before getting engaged. 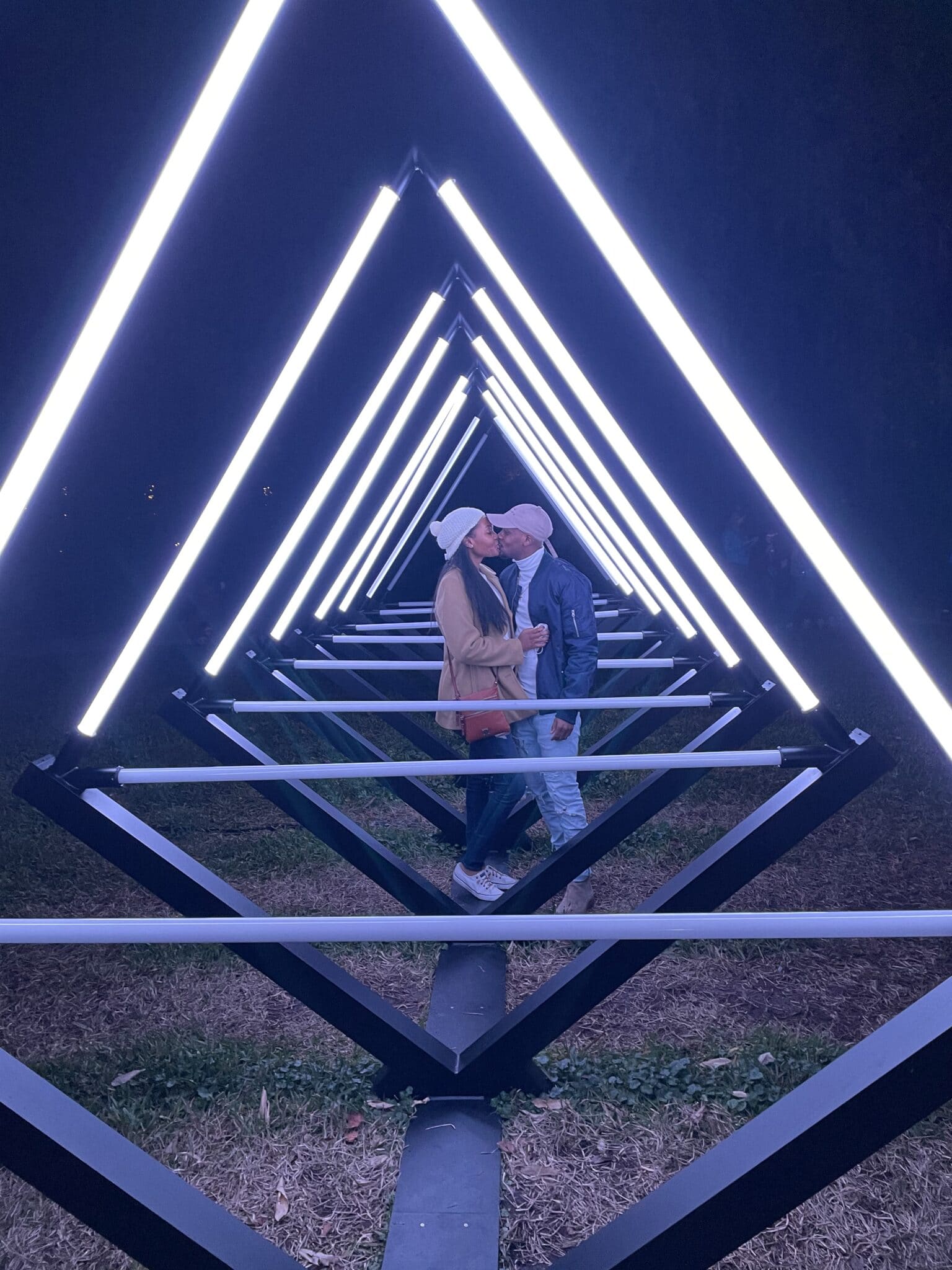 Did anyone help with the Downtown Orlando marriage proposal?

There absolutely was help. Wouldn’t have been able to get it done without the help. Casey from The Balcony in Orlando helped plan out the whole event. She reached out to all the vendors for me, and just made life so much easier. The proposal was originally supposed to be outside on The Balcony, but it rained on the day of, so we had to move it inside and everything still went as smooth as can be. Honestly, everyone at The Balcony who played a part was very helpful. 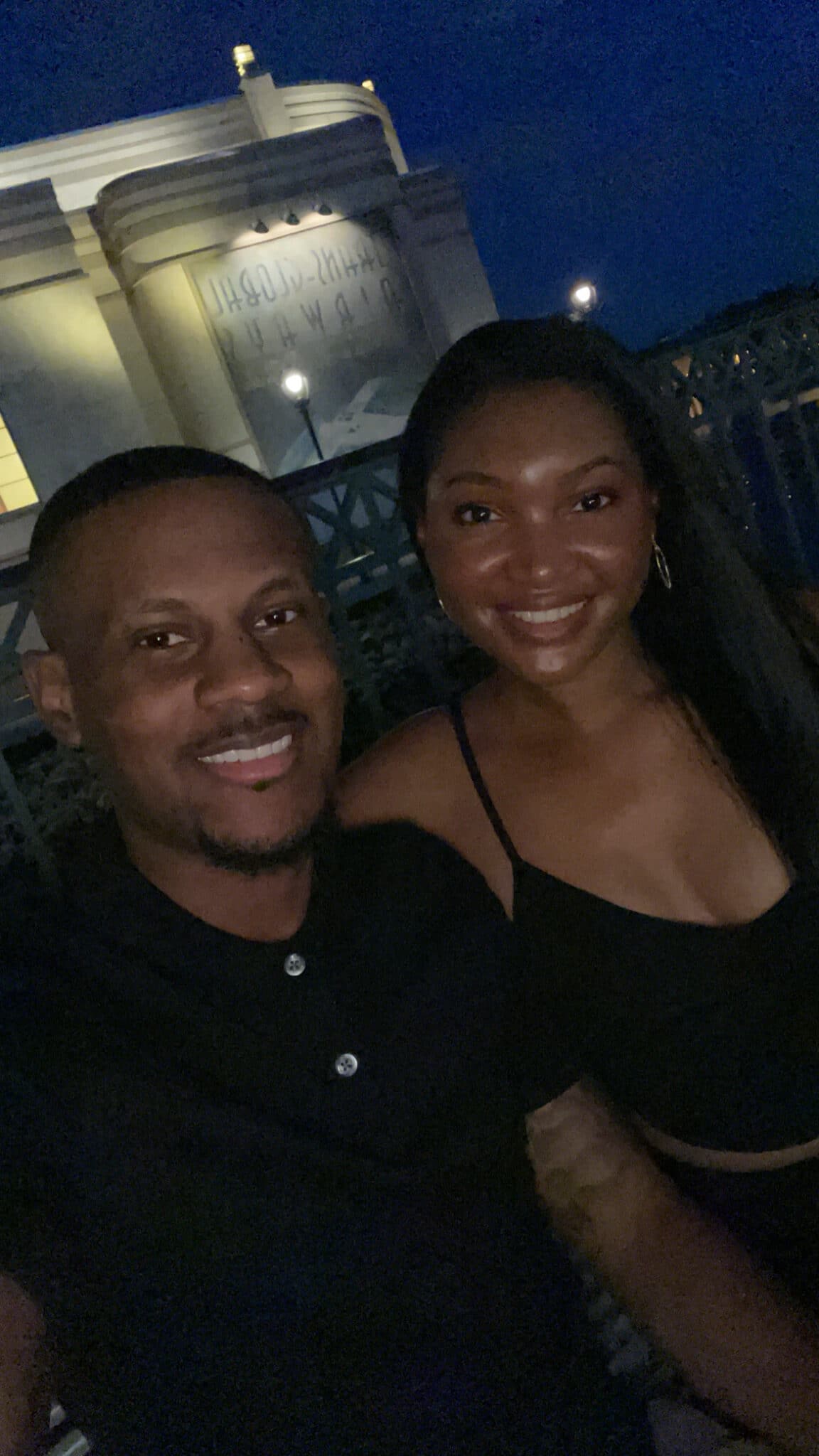 Alexis’s mom also helped out a lot in brainstorming venues, inviting family/friends, and making sure no one slipped and told about the surprise to come. Lastly, our photographer Dani was a big help. Communicating with her and making sure we got the best shots for this memorable moment made the moment that much better. Now we’re able to relive the moment all over again every day, so a big thanks to Dani.

Alexis had no idea the proposal was coming. I would always throw her off by saying maybe I’ll propose sometime in 2022 or 2023, but in reality, I was always planning the proposal this year and just really wanted to catch her off guard. 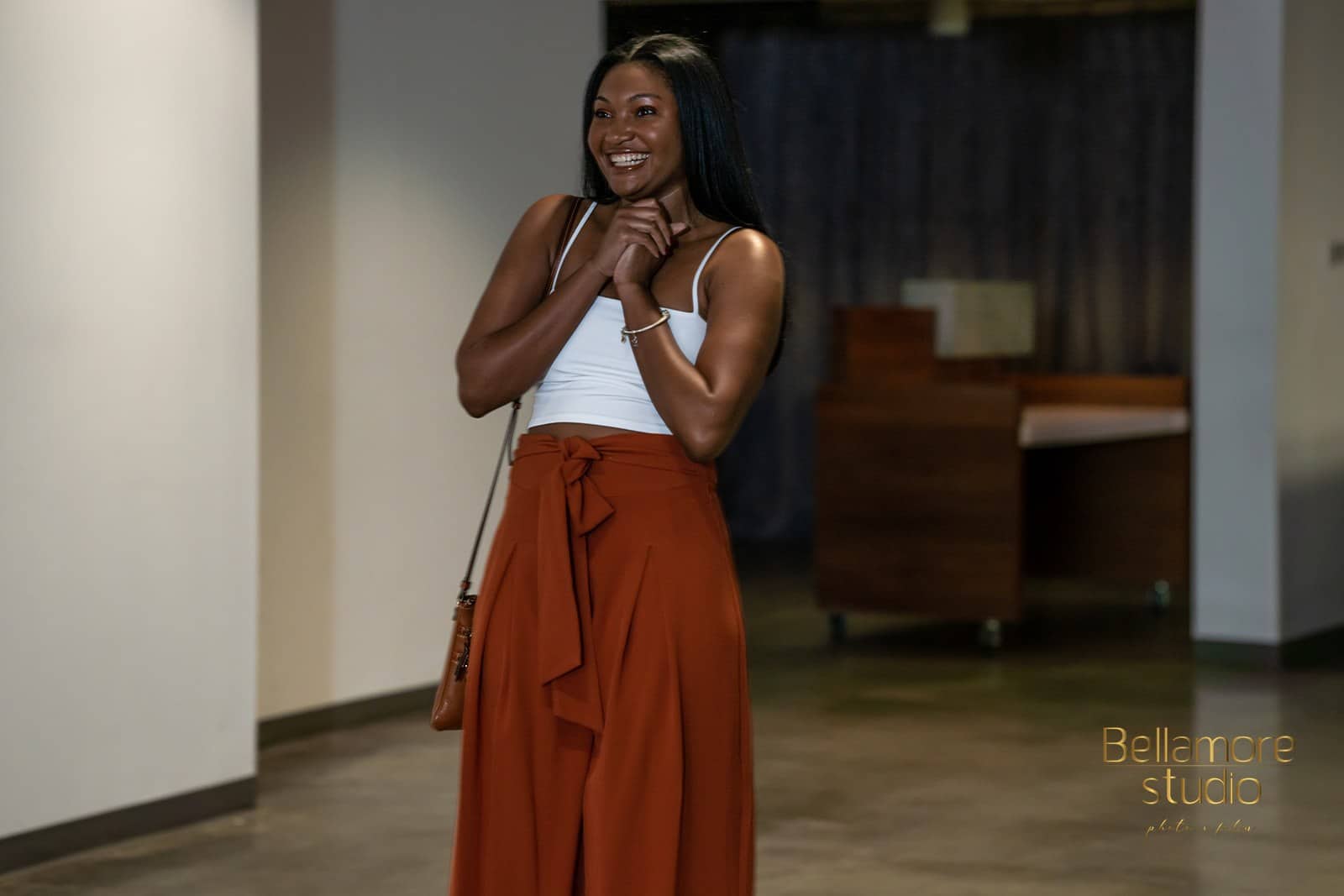 On the day of the proposal, I told her we had a very important event to go to and we’ll need to dress nice. We drove the normal route to downtown Orlando and the whole way there I’m sweating. As we pull into the parking garage I ask her to close her eyes. She reluctantly closed them. I walked her up the elevator and into the venue where family and friends were all quietly waiting. 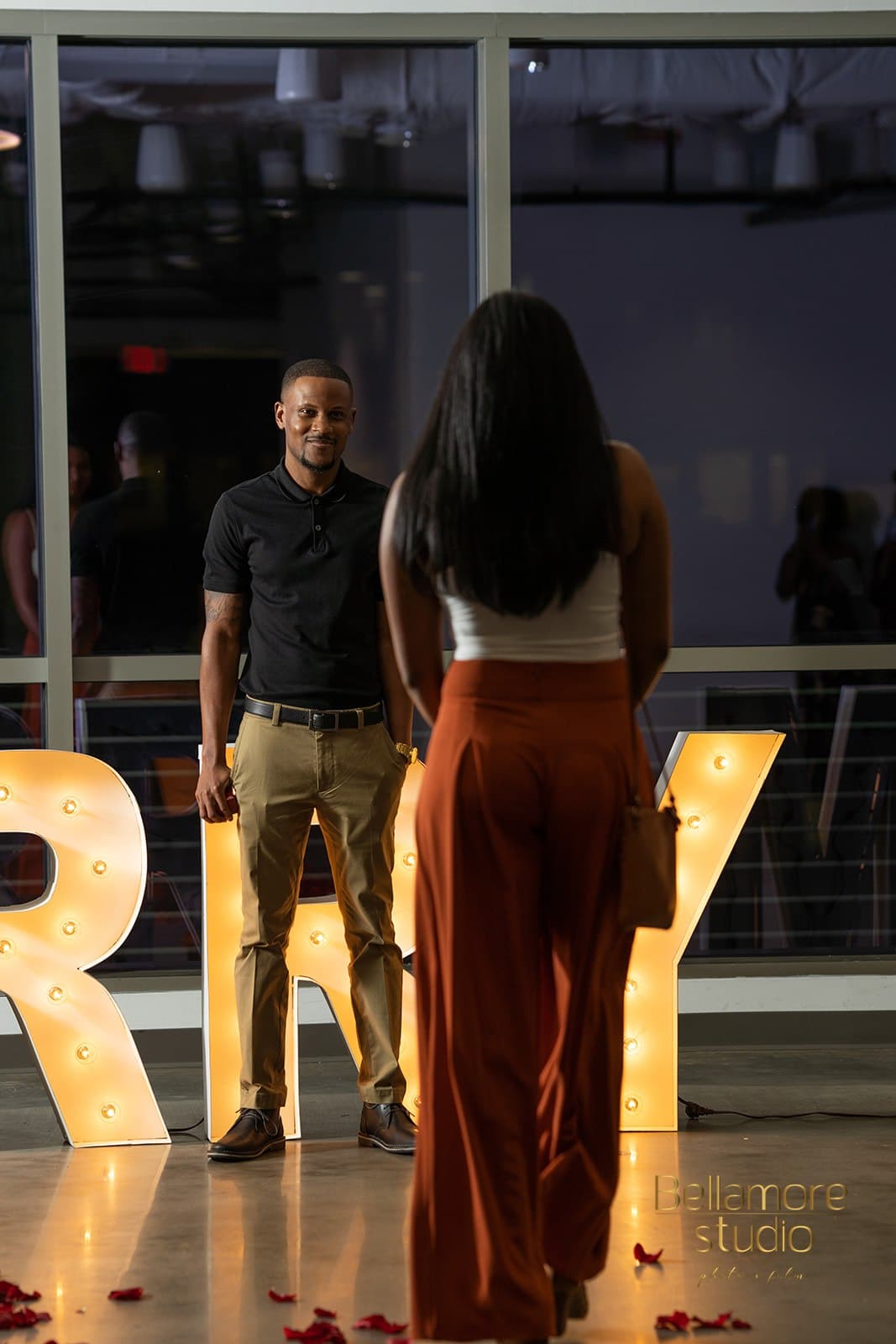 With a Marry Me sign and rose petals on the ground I walked up to the front and asked her to open her eyes. She opened her eyes and was completely surprised as she teared up and walked down the aisle. From there it was a blur as we were both caught up in the moment. After getting on one knee and placing the ring on the finger, we were met by family and friends with love and a lot of congratulations being said. 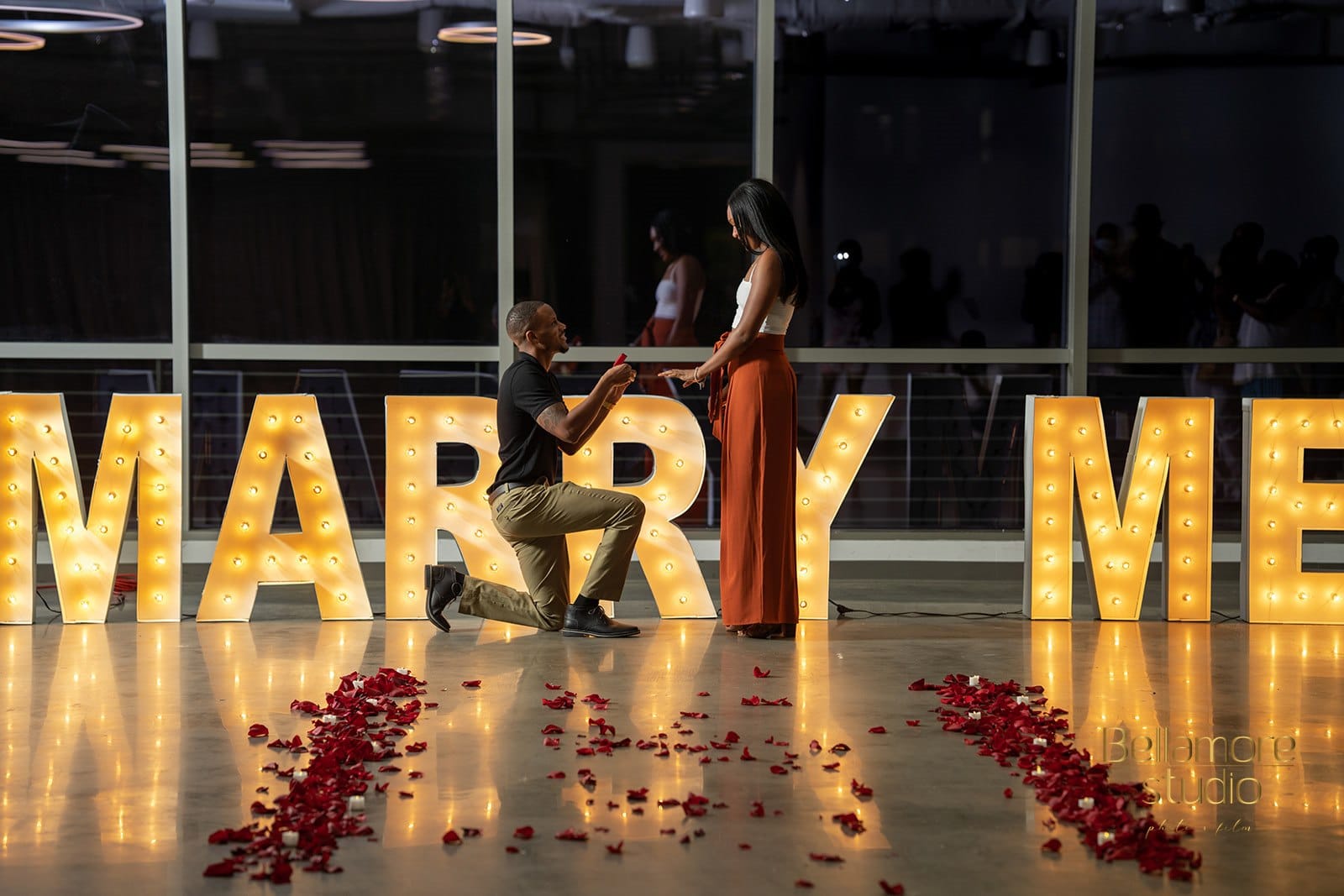 We then took family photos followed by our own engagement photos and enjoyed the rest of our night with the family and feeling as though we were on cloud nine. 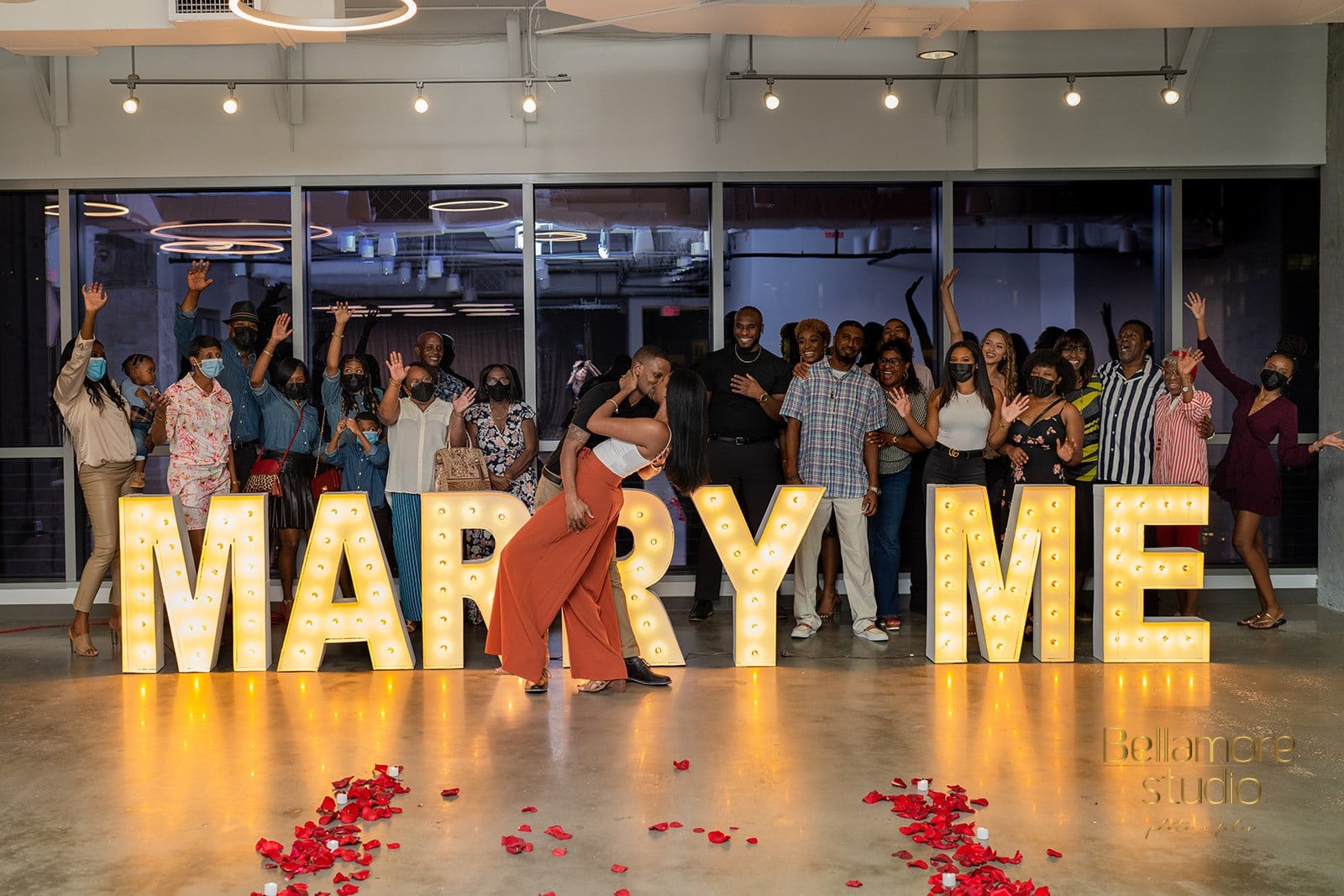 The best moment of the proposal was opening my eyes and seeing Rashad down the aisle with the Marry Me sign behind him and then looking to the right and seeing both our families and friends.

We told all of our family and friends that couldn’t make it to the event first. 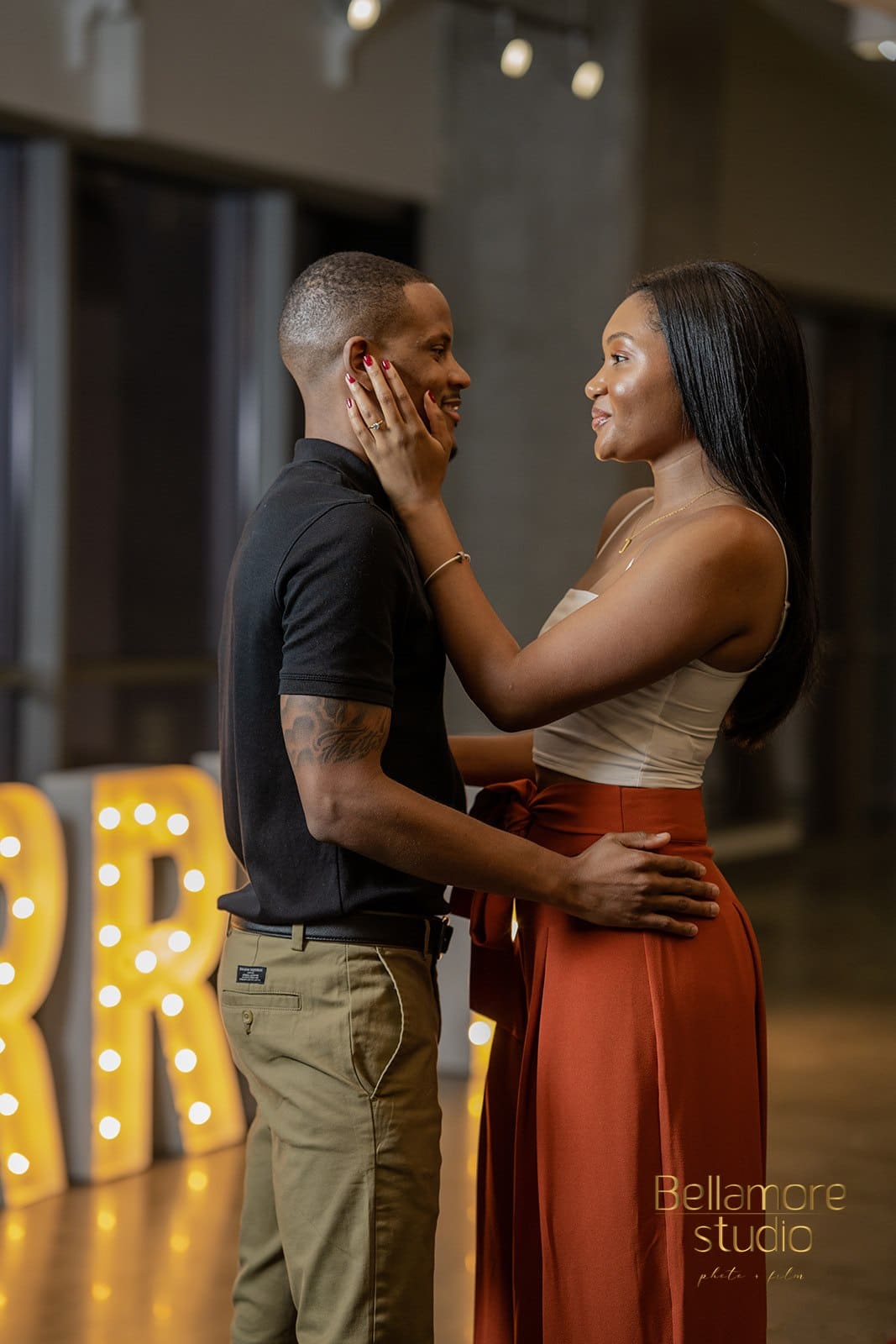 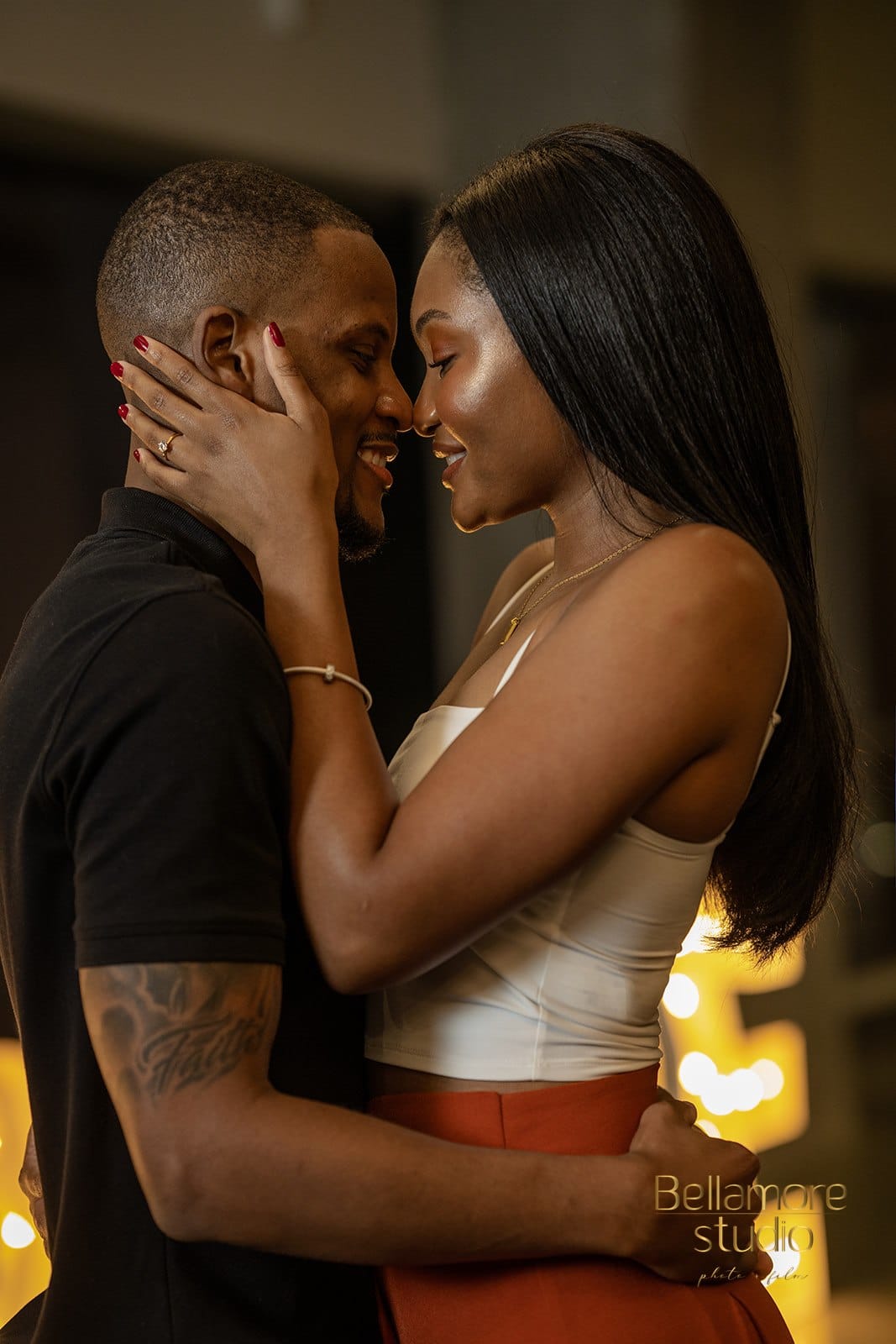 The ring was purchased from James Allen. It is an 18K yellow gold 2mm comfort fit solitaire with a round diamond.

Honestly, nothing has really surprised us about being engaged.

We’ve enjoyed the process of being able to start planning the next stages of our lives together. 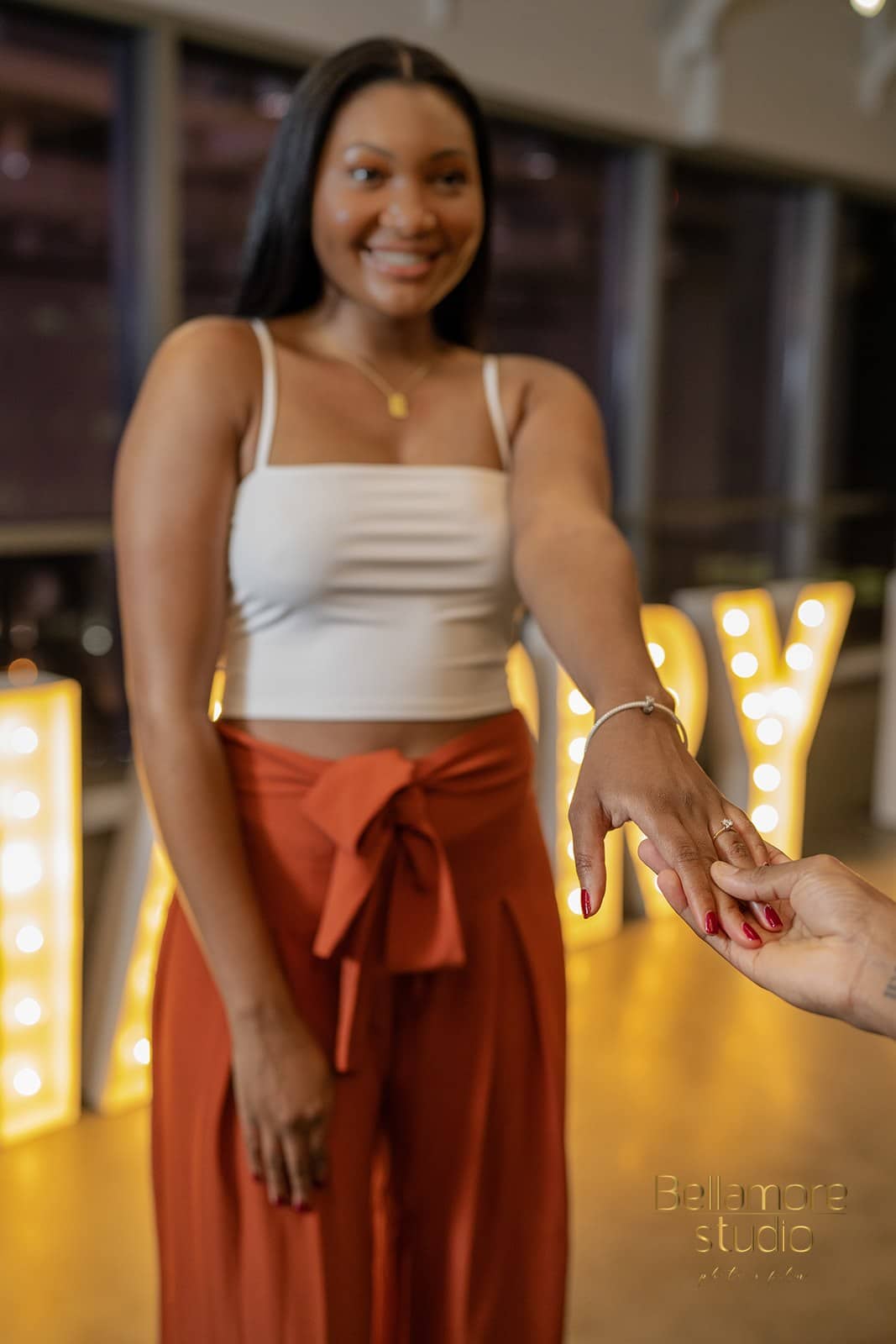 We are actually forgoing a wedding and deciding to get married at our County Courthouse. 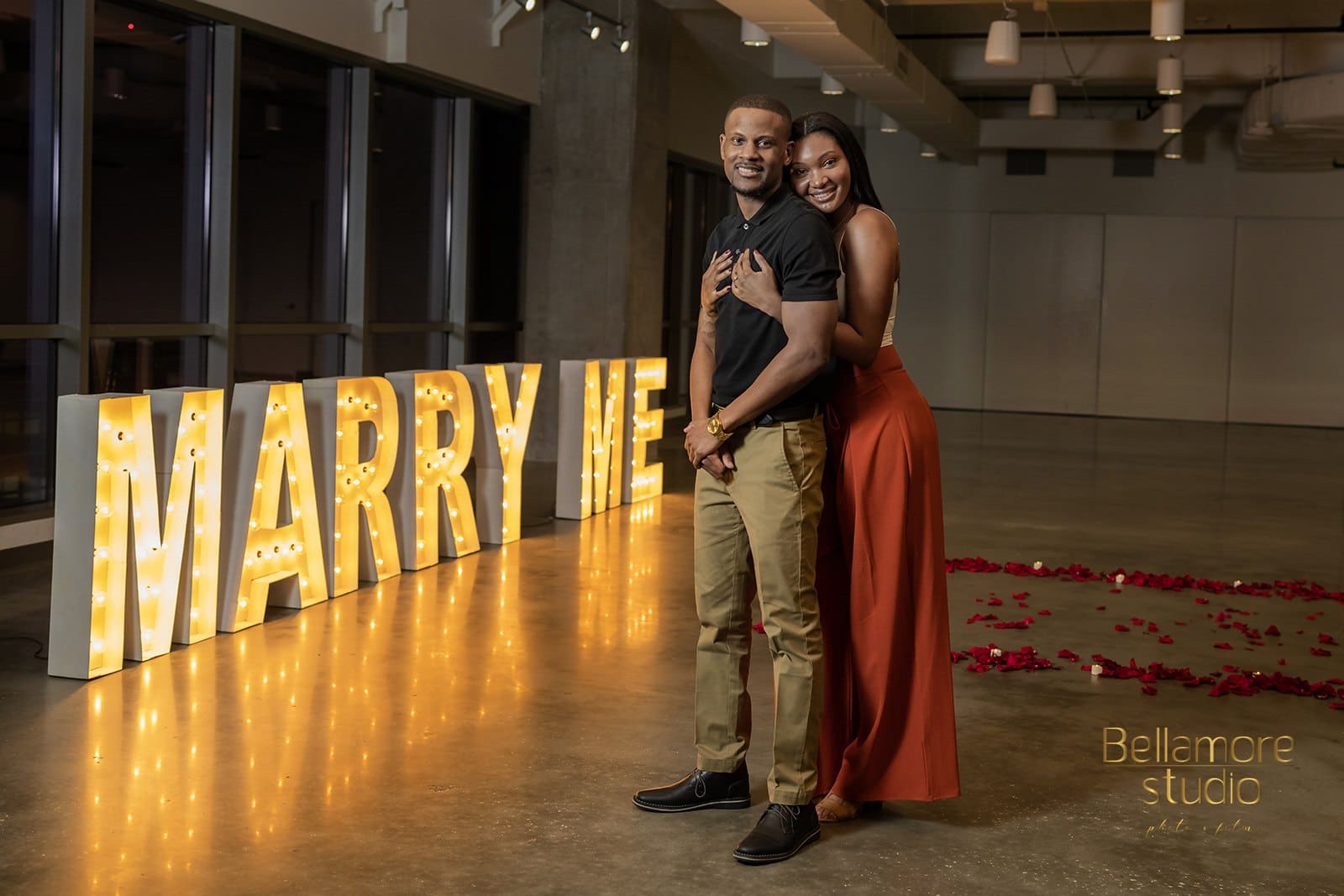