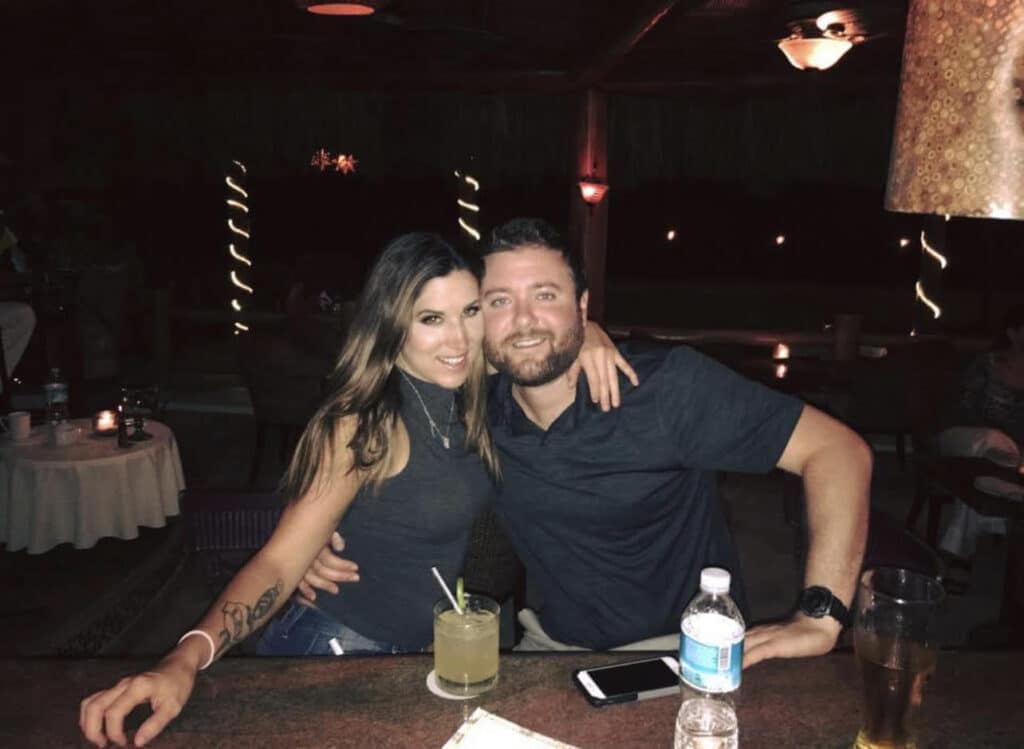 We love a great at-home proposal story, don’t you? When we read this story, we knew that we wanted to feature Marie & Mike’s Orlando marriage proposal at home. 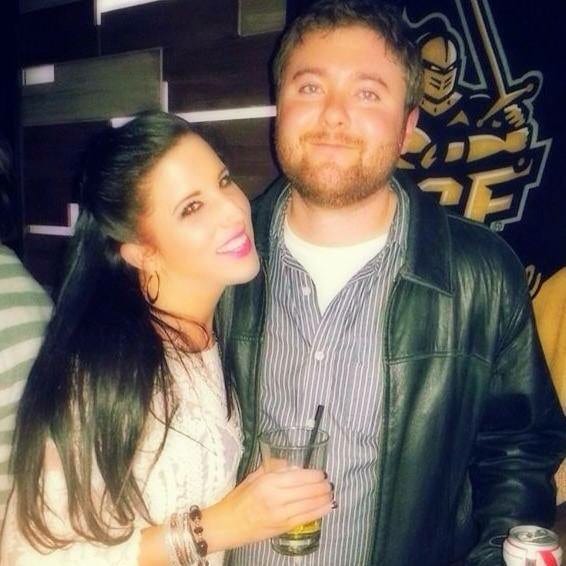 We met in 2013. I was working and he was playing music at a restaurant in downtown Orlando. I offered him water and apparently, that meant a lot to him because on his next break he asked the owner if I was single.

When his gig was over he came over to me and we stood there and talked for a while. He then asked me for my phone number and in a very sarcastic tone I asked, “why?” And he became choked up, made a joke, and packed up. 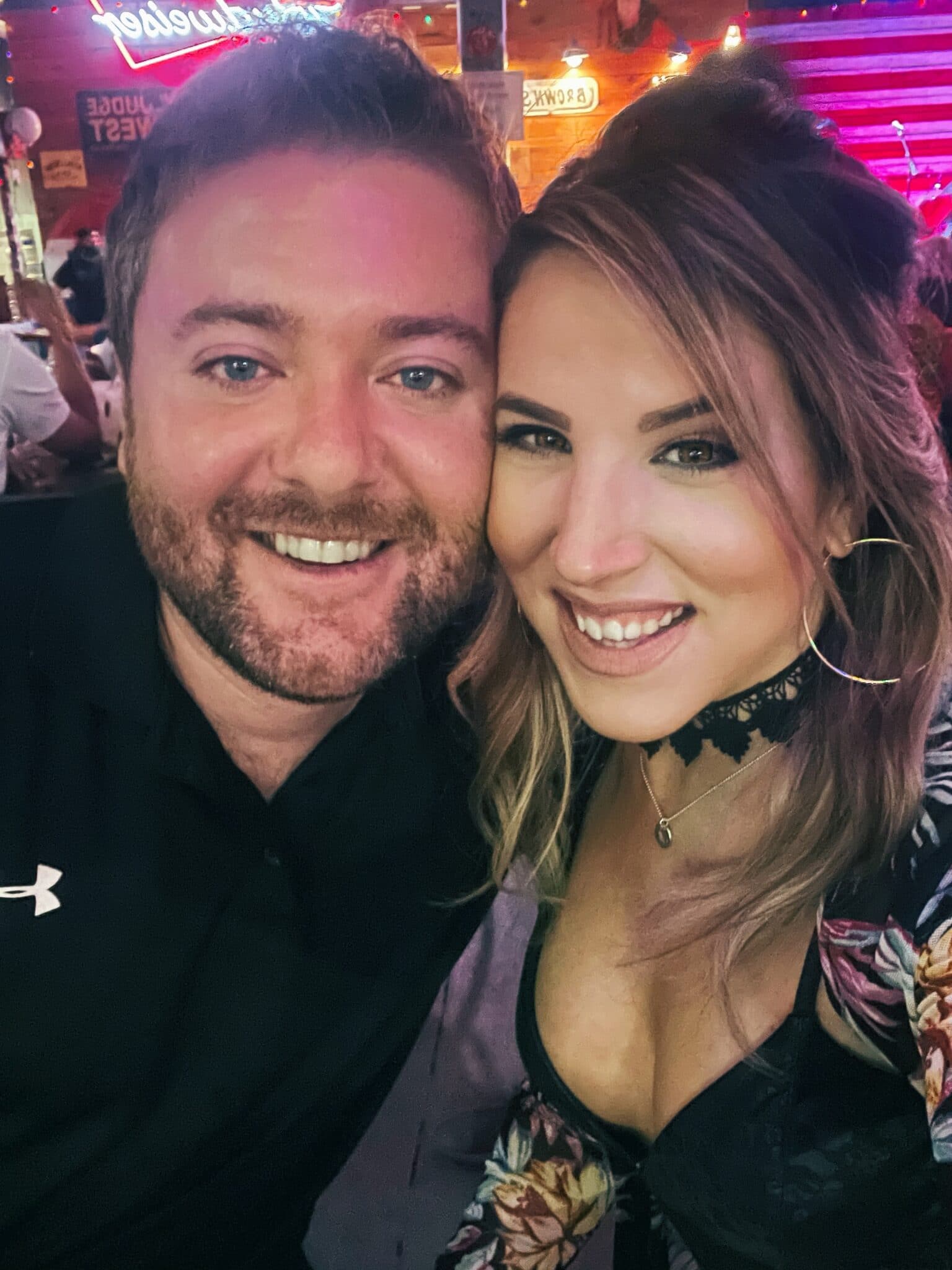 Moments later I went to hand him my number that I wrote on a napkin and discovered that he had left. I then stalked him on Facebook and wrote him a very witty message explaining that I wished he had stuck around.

A week later he played again and after his gig, he and I and some of my coworkers were standing around after the place closed, and being the comedic that he is, he put bitters in his mouth after being dared, and to fix the taste he squirted mustard in his mouth. 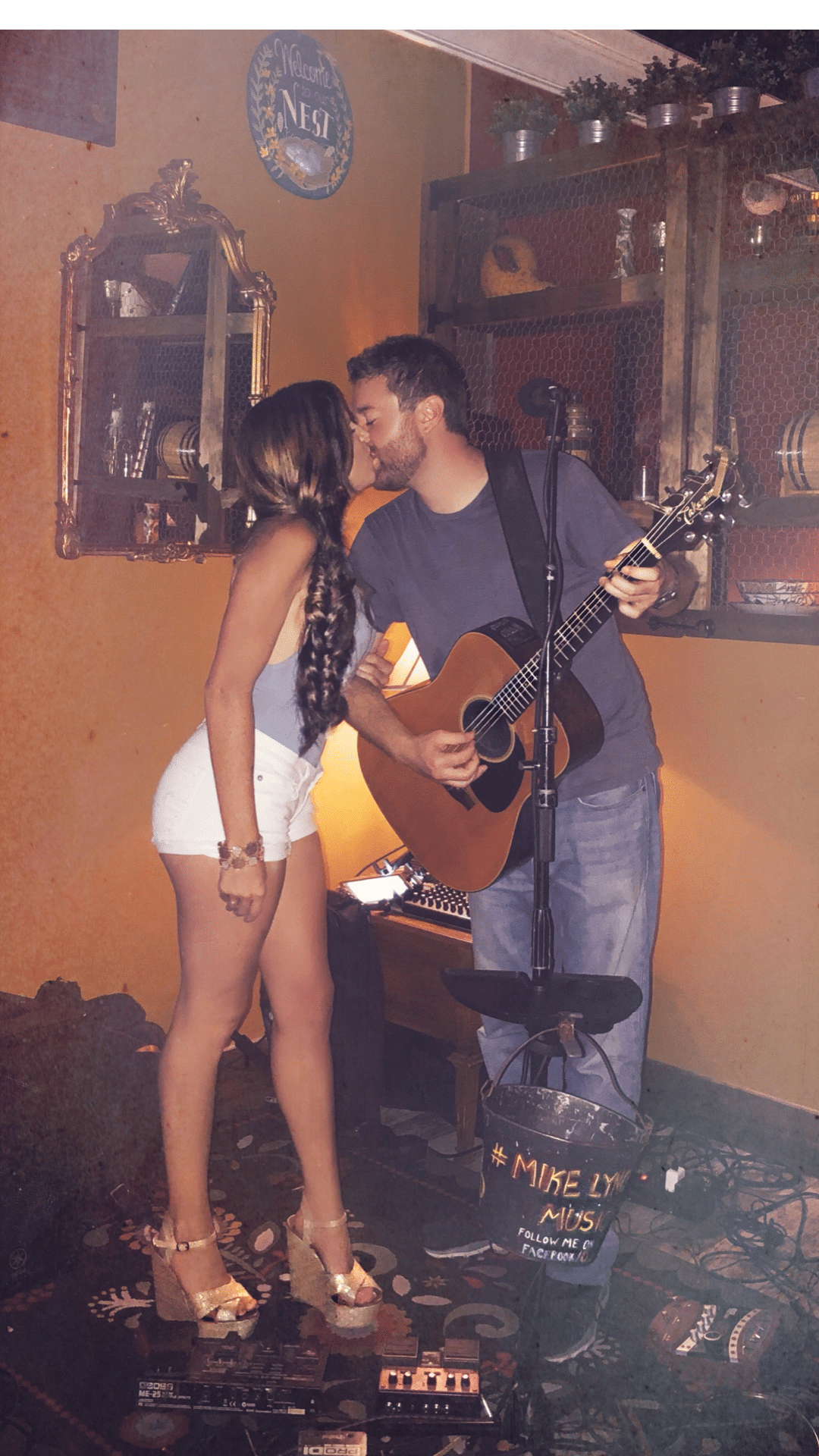 I was star-struck – I remember at that moment, I didn’t want to go another minute without him being mine. He was hard to land, that’s for sure! But here we are.

We live in Baldwin Park so we are very active together. We love rollerblading and running. We also love our local restaurants here in Baldwin and watching live music together. We also enjoy sitting on our balcony listening to music and talking about life. We are both artists and love sharing our passions together. 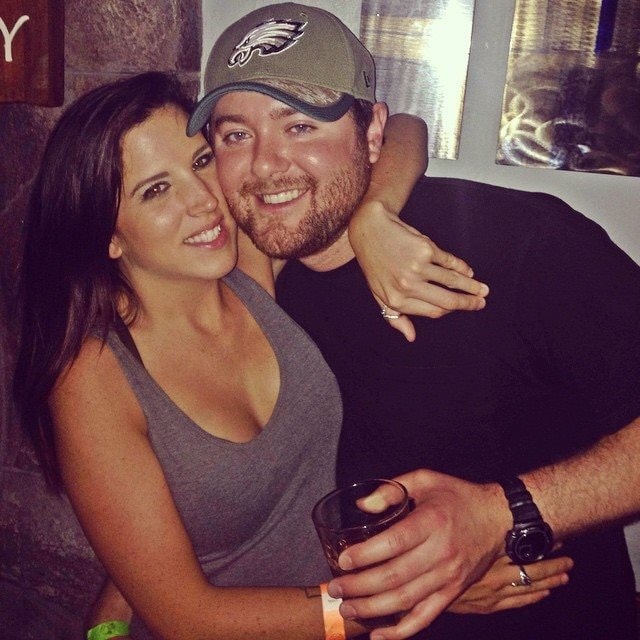 We were together for 7 years and 4 months.

Did anyone help with the proposal?

Britt Dowda, my best friend. She helped him pick out the ring, and she set up my entire balcony with candles and flowers it was so beautiful. She also owns Petals By Design, an amazing local flower shop.

On April 24, 2021, Mike and I went out for dinner at Linda’s La Cantina. As we were waiting for our table, our ring doorbell was going off and that’s when Mike started stressing. Our friends were showing up at our place to decorate the balcony. 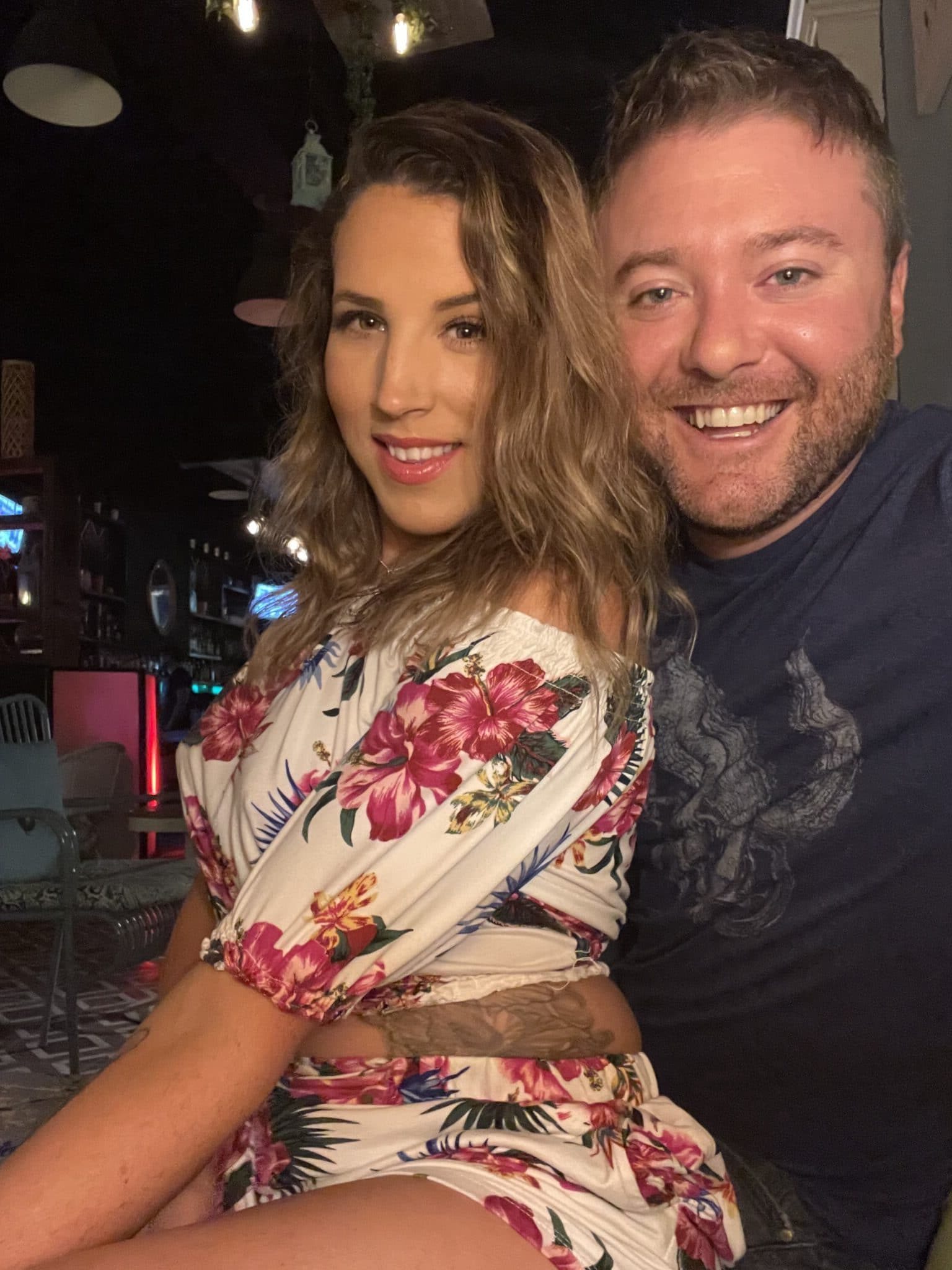 After we were sat (at a six-top table mind you) he got up and “went to the bathroom”. He was acting strange and after seven years of being with him, I know when he’s up to something. I thought maybe others were joining us with a big table, and when he got back he looked panicked. I eventually found out that at that moment, he was telling our friends to remove the ring doorbell and to hide it in a drawer so it would stop going off on my phone.

He also asked the hostess to give us slow service so our friends had time to set up and funny enough, we had the fastest services we’ve ever had. It was as if they heard him say the opposite. We would order a drink and it literally came out in under 30 seconds. He became more stressed at that moment.

Now, this might be too much information, but it’s part of the story. Once we left the restaurant he had to find a way to get me back to our apartment. So he made the excuse that he had to poop. So I laughed and rolled my eyes and say OK.

When we got home, I walked in and all the lights were off and I put my things down, said hello to our dog and he asked me to grab a white claw out of the fridge. I noticed it was the flavor lemon and we didn’t have those an hour ago and at that moment he opened up our curtains to the balcony and said, “Lemon?! Alright, just come out here” as I walked, all I noticed were the beautiful flowers, candles and when he immediately dropped down to one knee and asked me to marry him. 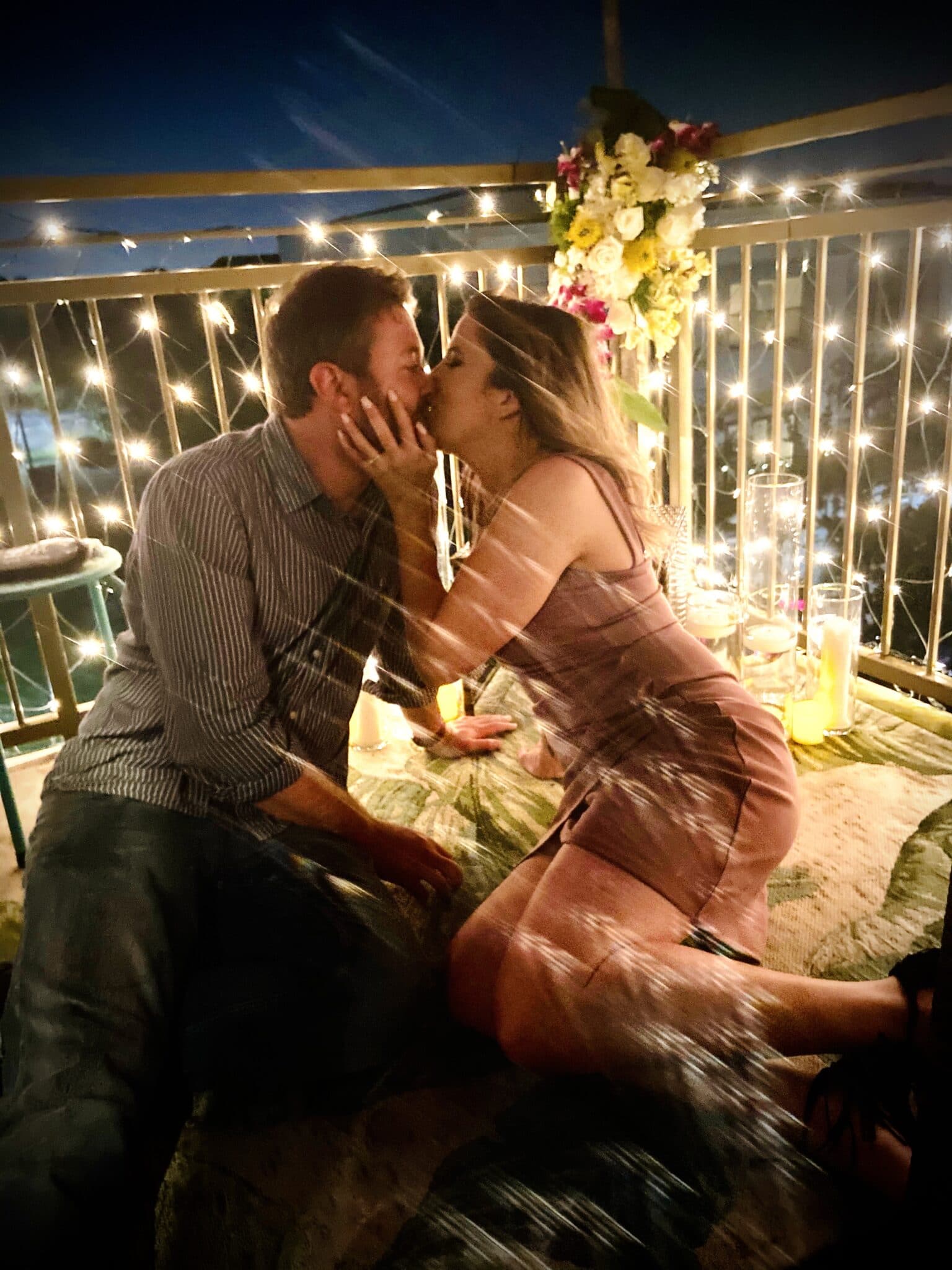 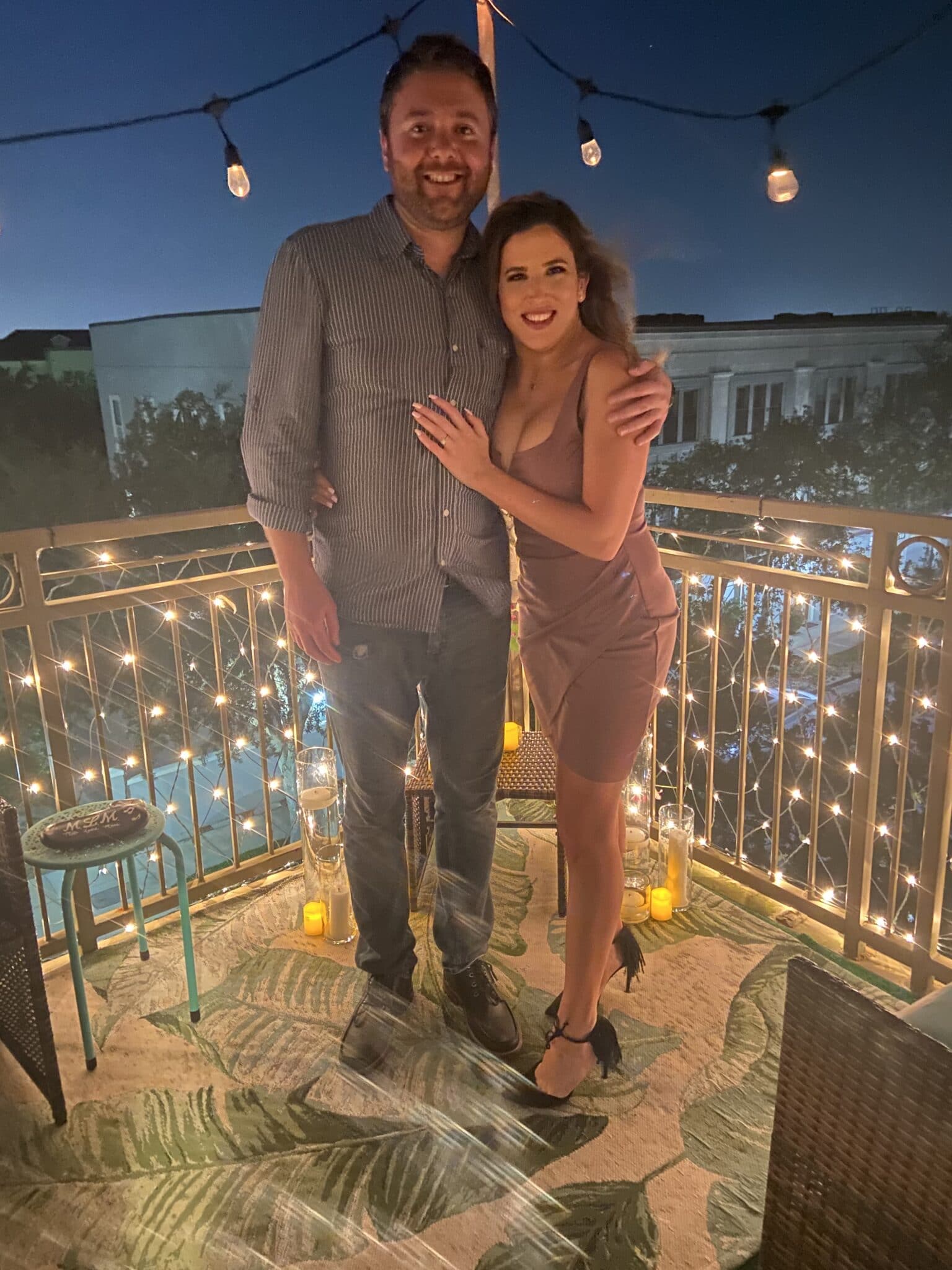 I was in absolute shock and kept nervous laughing asking if he was joking. He handed me the ring in the box, I remember thinking it was so incredibly beautiful and everything I ever wanted. I handed the box back to him and he placed the ring on my finger and I remember him holding me in his arms and me saying this doesn’t feel real.

We then had a quick moment together and I looked at him and said, “I knew something was up, I knew you didn’t have to poop!!” And it took him awhile to process what I said and he said, “Why would you say that!” While laughing and pointing to my best friend Brittany who was recording and I yelled and laughed.

Seconds later our 13-year-old son surprises me by hugging my neck. I didn’t know anyone else was there. Then my mom came out, following my best friend’s fiancé, Brett, and our friend Brandon Plachno. 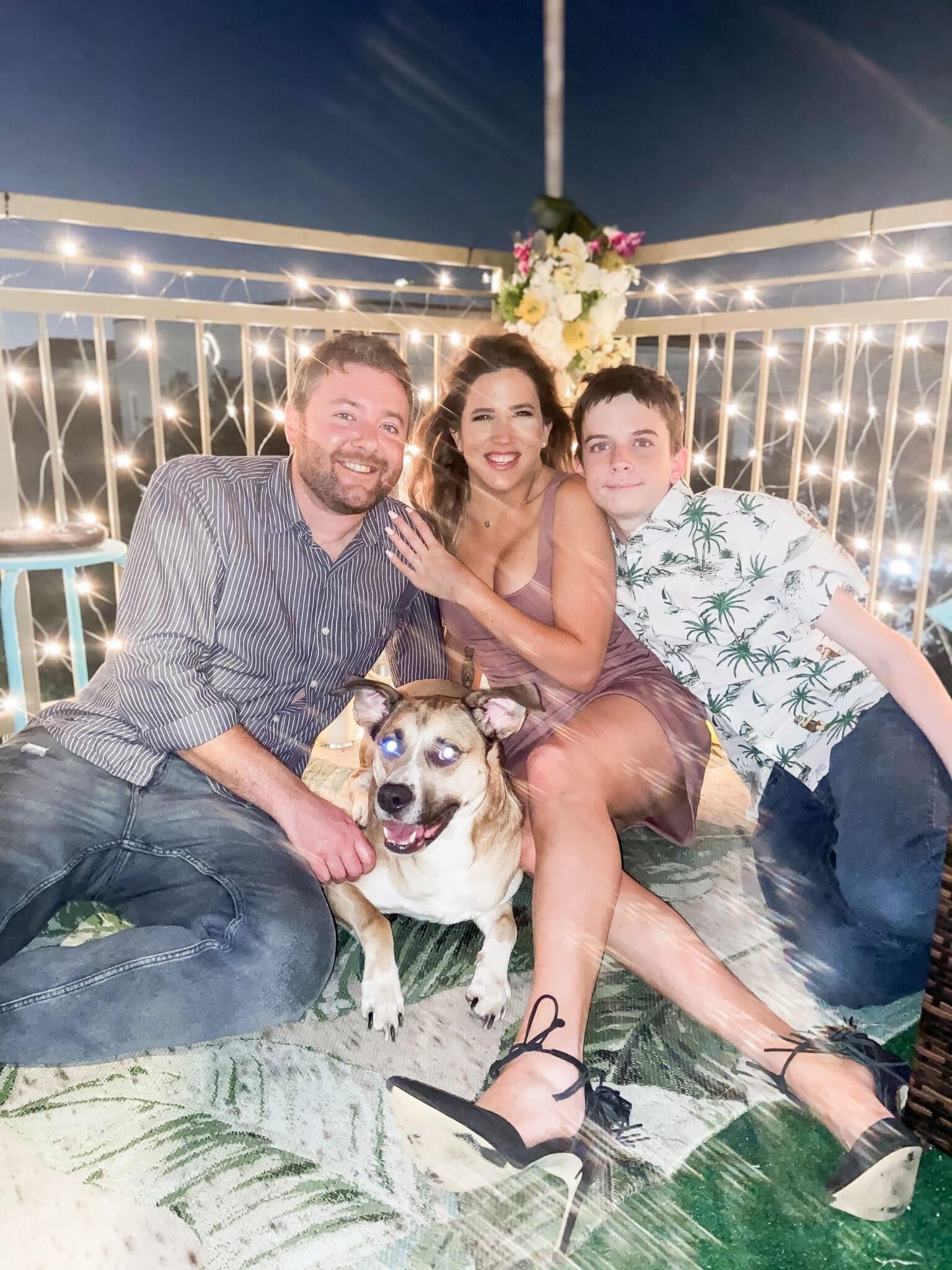 It was so nice that we were able to share that moment together in private, and then celebrate with everyone around us. For my last surprise of the night, my best friend Lauren Byrd who lives in Virginia, and 30 minutes after all of us talking and drinking champagne she came in and hugged my neck. I was completely overwhelmed with love and excitement. It was everything I ever wanted.

The best moment of the proposal was our son hugging my neck and all three of us hugging. I had Carson when I was 16 years old and to find a man that promises to be not only my husband, but his father is something I longed for.

We called family and close friends and kept it private for about 2 weeks. The next day we had an impromptu engagement brunch. Our families dropped their Sunday plans to celebrate with us. I was so incredibly blessed they all came to share that moment with us. 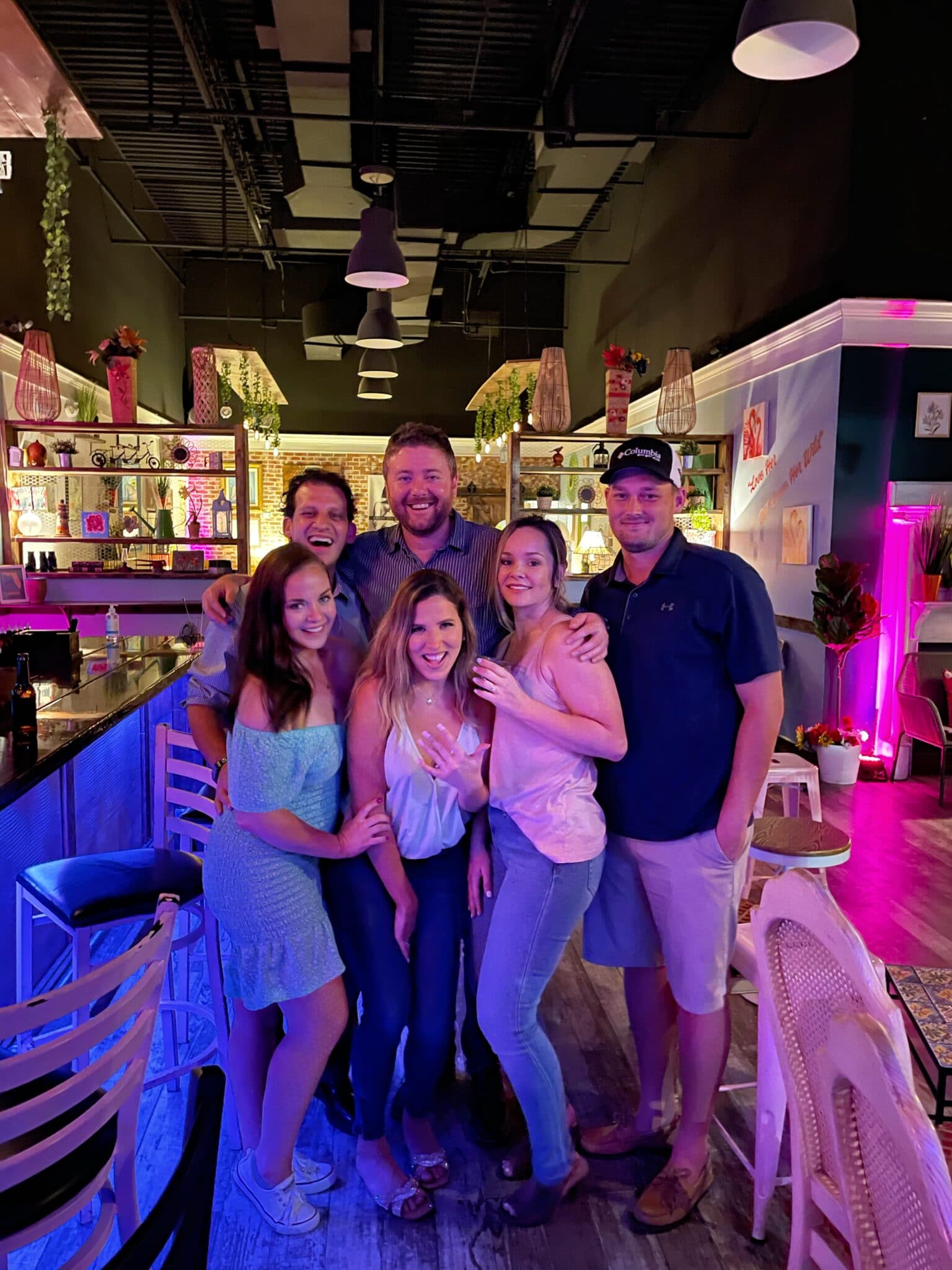 He did an incredible job!! We went to look at rings at Victoria Jewelers in Baldwin Park right before Covid hit and I gave him a slight idea of what I wanted. He ended up purchasing my ring there at the beginning of this month. They were very very helpful in sticking to his budget and getting the most bang for his buck. My ring is cushion-cut with a rose gold halo and diamonds around the band.

Everyone tells you that once you become engaged nothing really changes, but I completely disagree. I feel so secure now more than ever in my relationship and very hopeful for this new chapter with him.

What I’ve enjoyed the most is having talks about the future with Mike. We used to have them before, but now we are actually putting them into place and it makes me feel safe and secure.

I do hair and makeup for weddings for a living and I can honestly say I’m not too over the top about the planning aspect. I am excited to see what venue we choose and the food, but I know how stressful it gets. 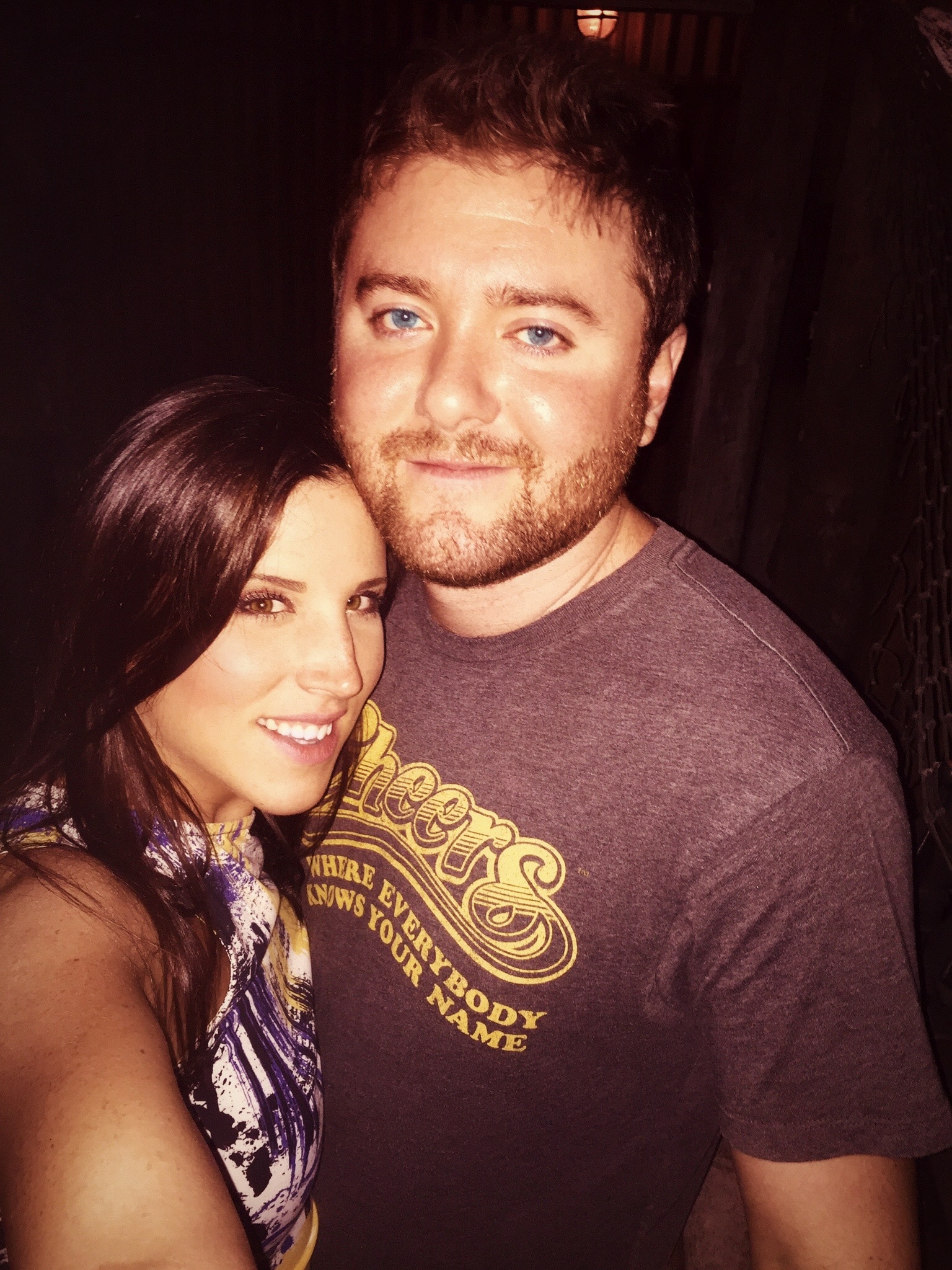 We are talking about renting an Airbnb in North Carolina in February or March 2022.

We want something where we don’t have to worry about traveling from one place to another. We will stay in this Airbnb for about a week or so and it will be nice to wake up, have my morning coffee, at the place I’ll be getting married.

Factoring in the things that mean the most to us. The venue, food, photography/video.

Chill, nothing over the top. Very casual and laid back.

Kristy’s Artistry Design Team for hair and makeup and Petals by Design for flowers!

As a newly engaged/hair and makeup artist in the industry, I will say let the small stuff go, don’t wait for the last minute, if you have a coordinator, actually use them on the day of, and make sure you eat! 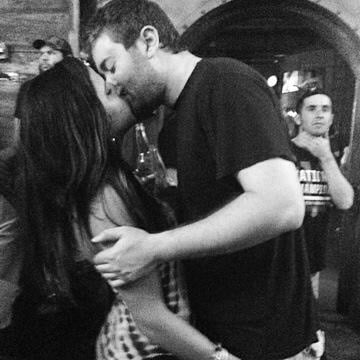 Congratulations Marie & Mike on your Orlando marriage proposal at home!