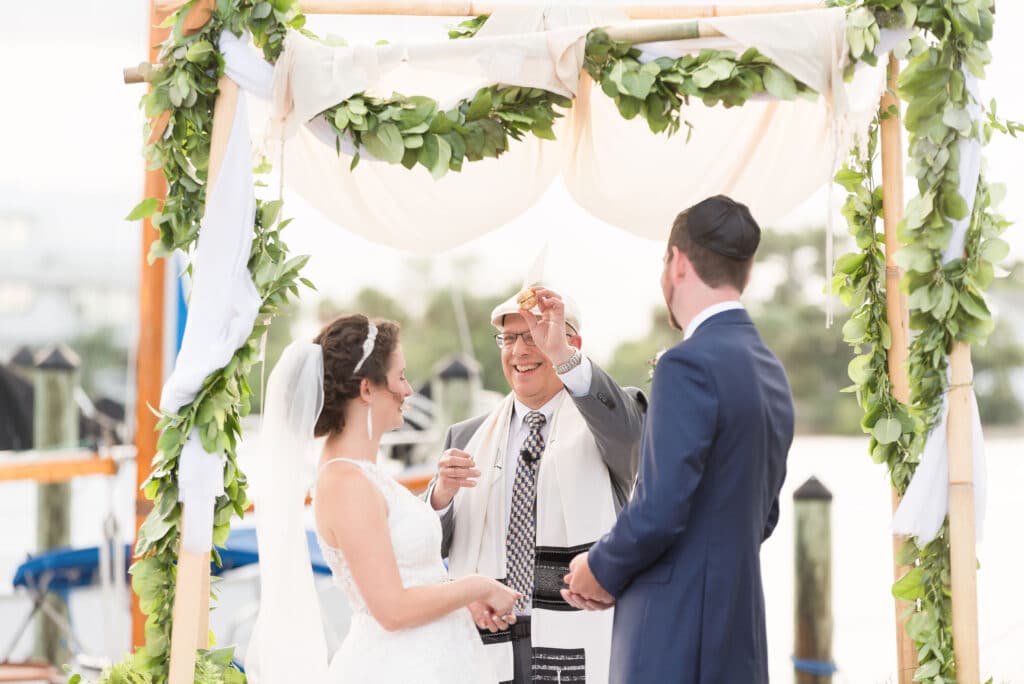 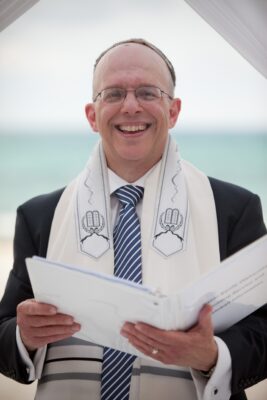 Many interfaith couples of a Jew and someone of a different background are married by secular officiants. Some are married by clergy of the other faith. But the majority of such couples are married by a rabbi. Regardless of the cultural reasons for these choices, it’s worthwhile to know some of the options for couples in these situations.

When I ask Jewish couples or interfaith couples which traditional elements they want in their wedding ceremony, they always mention breaking a glass at the end.  Most also mention a chuppa (wedding canopy) or a stand-in for it such as an archway or gazebo.  Unless they’ve attended a modern Jewish wedding ceremony recently, most couples don’t know which other elements are essential and what non-traditional options they can include.  Here is some information to help couples and their wedding planners/coordinators get started. 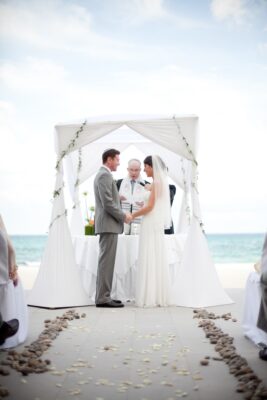 A modern Jewish wedding ceremony has 3 parts: 1 – the betrothal, in which rings are exchanged and declarations are spoken, 2 – the reading of the ketubah (marriage contract), and 3 – the completion with seven traditional blessings, personal remarks from the rabbi, and a final blessing, just before breaking the glass.  Here is some detail on each of the parts.

(Traditionally couples drink wine or non-alcoholic grape juice in both the betrothal part and completion part of the ceremony, but usually not from the glass that will be broken.) 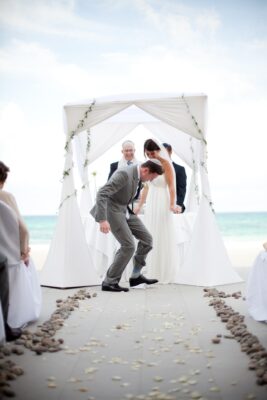 The essential element of a Jewish wedding is for the groom to give the bride a ring, which she accepts of her own free will, and to declare “You are sanctified to me, with this ring, according to the law of Moses and Israel.”  I have interfaith couples say instead “according to the traditions of Israel.”  In modern times the bride makes a parallel declaration. Same-sex partners make identical declarations. The ring should be simple – no stones – and no holes or gaps, as we hope the marriage will be unbroken.

Another key element is the ketubah, traditionally a legal document, that was innovated by ancient rabbis to protect the bride.  Most modern couples use a romantic document, which is usually a beautiful piece of art that they have framed and will display in their home.

Just put “ketubah” in a browser and you’ll see dozens of texts and hundreds of artistic designs.  Most are written in Hebrew and English.  I usually read only the first paragraph in Hebrew and all of it in English, because it’s something the couple chose. 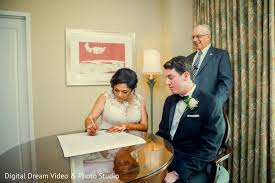 Between the reading of the ketubah and the completion part of the ceremony, couples can read personal vows to each other that they have written.  Couples can also have the rabbi, or a guest, read a supplementary text that is meaningful to them, such as a romantic poem or a non-theological passage from the traditions of the non-Jewish partner in an interfaith couple. A reading from the non-Jewish partner’s background can be comforting to their family members and doesn’t make the ceremony “not Jewish.” 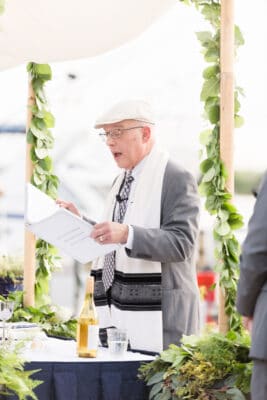 The seven traditional blessings are mostly things that any religious person would say.  They are often modified to be more inclusive for interfaith couples and are also modified for same sex couples – substituting partners, companions, etc. for bride and groom.  There are also “humanistic” versions for couples in which the non-Jewish partner doesn’t identify with any religion or for cases in which the Jewish partner considers him/herself Jewish by culture, not religion. They are usually chanted in Hebrew, with each blessing translated after it is chanted.  Sometimes guests read the translations.

For the final blessing, which is brief, many couples choose to be wrapped together in a tallit (prayer shawl).  Since a tallit is usually worn by an individual, this symbolizes the fact that the couple have become a family unit and, in some sense, are no longer two separate individuals.

Traditionally, the breaking of the glass, which immediately follows, symbolizes the destruction of the ancient Jerusalem temples by foreign conquerors. It is often explained instead as a reminder that there are moments of pain and difficulty in every human life, which the couple, united by love, will help each other to get through. 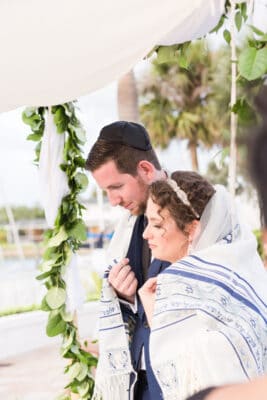 One other option, for interfaith couples, is the use of a “unity candle” at the beginning of the ceremony.  Surprise:  it came originally from Judaism!  While Christians often see it as trinitarian symbolism, it can also be understood as representing the joining of two families, as well as two individuals in the wedding ceremony.

Since most couples being married in Florida prefer an outdoor ceremony, mixing sand has become a popular substitute for a unity candle.  This is often meaningful for second marriages in which there are children from one or both partners’ prior marriages and everyone mixes sand. 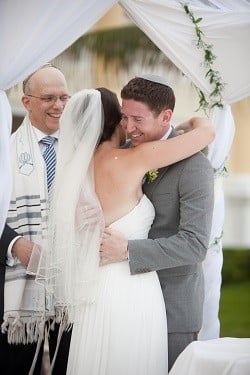 I love performing weddings because it’s one of the best parts of being a rabbi or a clergy person of any faith.  I’m willing to be flexible and creative in working with a couple to create a wedding ceremony that is beautiful, meaningful, and representative of them and their relationship.  I’m happy to spend the necessary time advising couples, their families, and planners or coordinators on the options because it’s usually a lot of fun!

Rabbi Sanford Olshansky has performed customized, personalized modern Jewish wedding ceremonies for Jewish couples and interfaith couples in Central Florida and Northern Florida for over 7 years.  Couples and their families, of all faiths, tell Rabbi Olshansky consistently that his ceremony was a beautiful and meaningful part of their special day.

To work with Rabbi Olshansky on your wedding, learn more on his website by CLICKING HERE