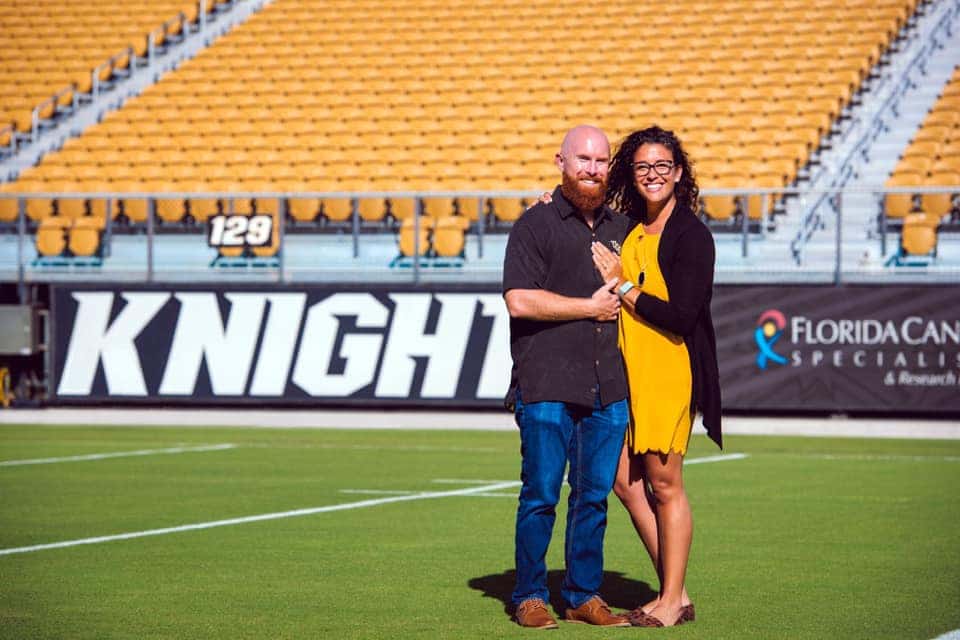 We love a great southern college proposal story, don’t you? When we found out the unique place this proposal happened, we knew that we wanted to feature Emily & Aj’s UCF marriage proposal story.

AJ and I met at our friends’ local CrossFit gym, CrossFit East Orange, back in 2015 when I moved back to Orlando from the Tampa area. We hit it off immediately but I got put in the “friend zone” and then towards the end of 2015 he took a job in Texas and I thought that was that.

In November of 2017, unbeknownst to me, he had since moved back to Florida from Texas and his company sent him to a tradeshow on International Drive at the convention center. One of the parties on his list of networking events for the week was being held at The Pub, where I work, and he reached out on Facebook messenger to ask if I would around before the event for him to come to grab a beer and catch up. I obviously told him, yes and he came and sat at the bar before the event and we reconnected and the rest is history! 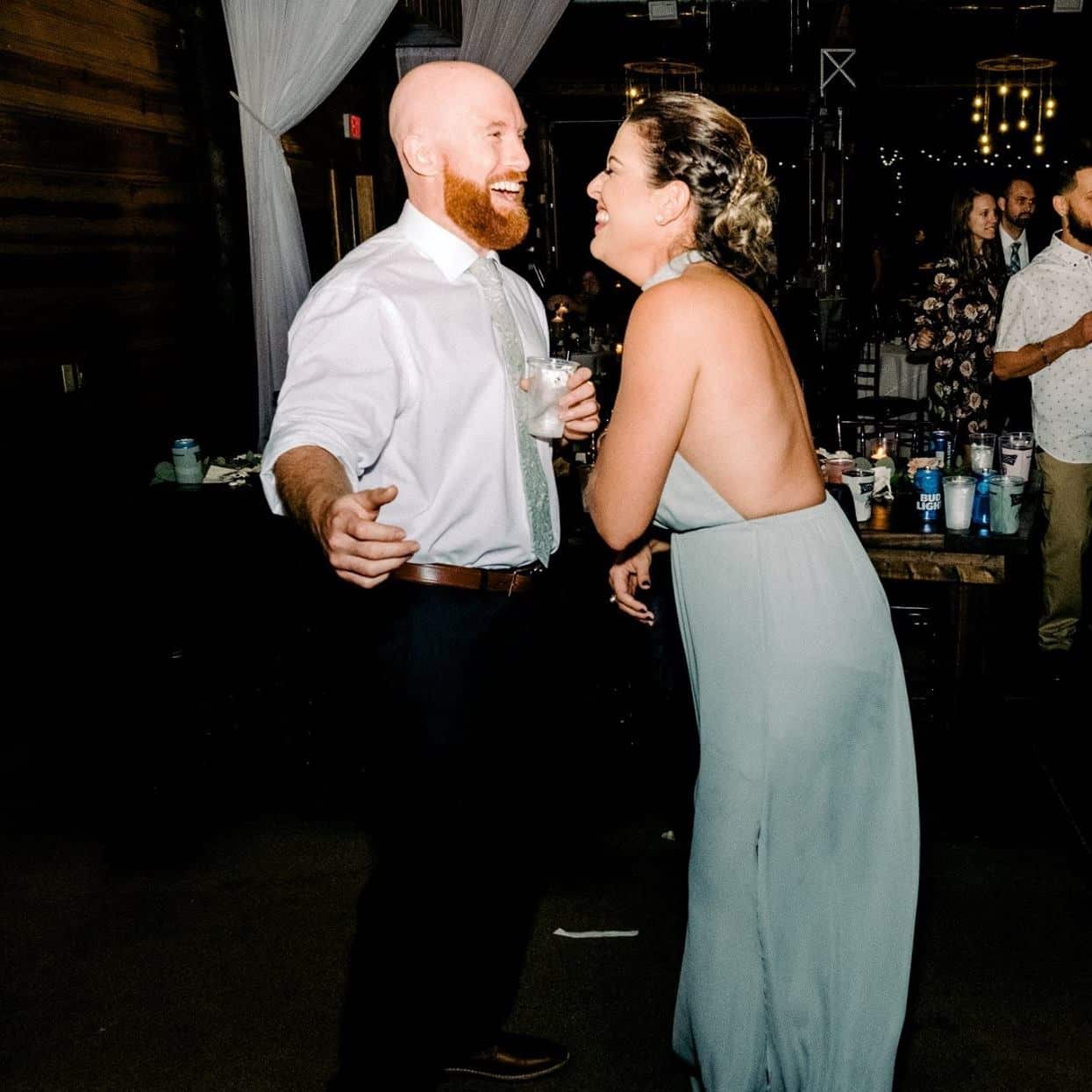 Go to UCF football games, work out, cook, go to the beach, and travel!

We are celebrating our 3 anniversary in April of 2021!

Did anyone help with the UCF marriage proposal?

YES!! His sister, Rachel! And shoutout to our friend Jenn who got Tim to be the photographer last minute when the original one bailed! 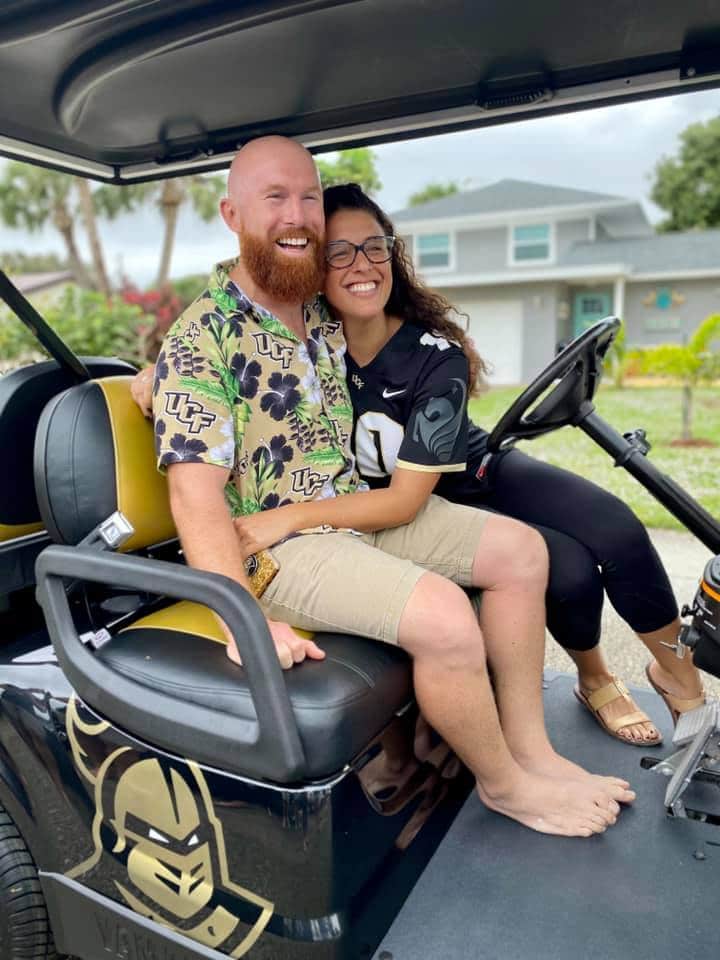 Well, I am an event planner for a living so I have been telling AJ forever that there was no way he was going to be able to surprise me because I always have to have a plan and it is so unlike him to have a plan. I am here to say that he 100% out planned the planner!

He got his sister involved who is also an Orlando area event planner and she outdid herself. We were already planning on having dinner with his sister and brother-in-law on Friday, March 19th, and on Wednesday of that week, Rachel texted me saying that one of the partners at her law firm got invited to a special meet and greet with the new coaching staff at UCF and he couldn’t use his tickets.

Knowing how big of UCF fans we all are he offered them to the four of us to go before we went out to dinner. Rachel then texted me a flyer, that I now know she made up herself, and a parking diagram, which was also fake. Without hesitation, I answer YES and we joked about how it was going to be hard to make AJ leave work early to get to the stadium on time.

Fast forward to Friday morning, I am so excited about meeting Coach Gus, I got dressed in my best UCF networking attire and AJ is acting completely normal. Tells me that I look great and that he is going to charge the Ring doorbell because the battery is low, and I head off to work. Sometime around 11 am that morning I get a text message that AJ turned off his location services (yes we share that) and send a text saying he was trying to send something and he hit the wrong button and can I help him fix it later and of course I said yes. 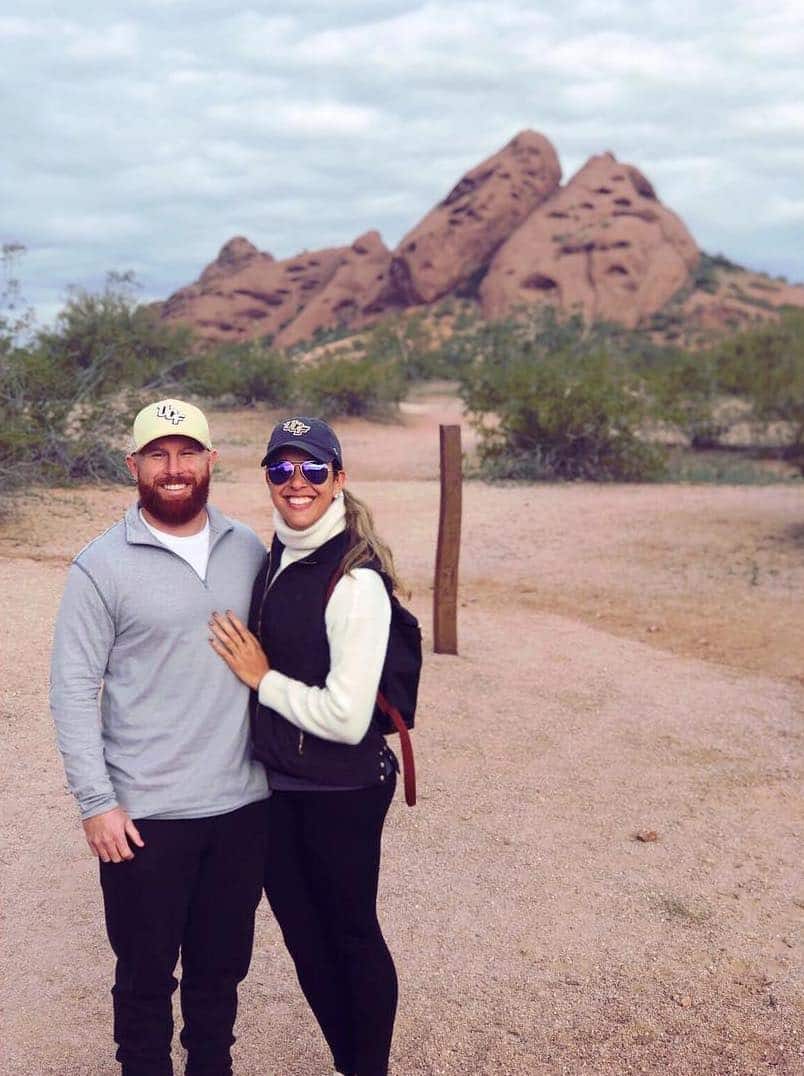 The day goes on around 4 pm I get ready to leave work and head to the UCF stadium to meet Rachel. I end up getting from I-Drive to the Waterford Lakes area super fast and decide to stop by the gym where we met to visit our friend good Jenn and say hi to some people I haven’t seen in a while since I am on that side of town.

Little did I know that by doing that I was helping AJ out A TON because the photographer that he originally hired had bailed and Jenn had connected him with another member of the gym who takes photos, Tim, and he was racing over to the stadium to get in position. So my detour actually helped everyone out and I later found out that everyone at the gym knew and they were so confused as to why I was there!

After leaving the gym, I head to the stadium using the (fake) map that Rachel had sent me. She had sent me a text already telling me that a guy in a white shirt would be at the gate checking people in and to just give my name and he would walk me in. I legit am thinking nothing of this because I have been to so many networking events it seemed so normal!

As I am checking in I throw another wrench in the plan because I had to use the bathroom and the guy didn’t know if any of them were open in the stadium! As I walk out ready to head into the “event” the guy says that the field has just been painted for the team to start practice tomorrow but that the event is taking place in the center of the field and to just walk straight in after he opens the gate. 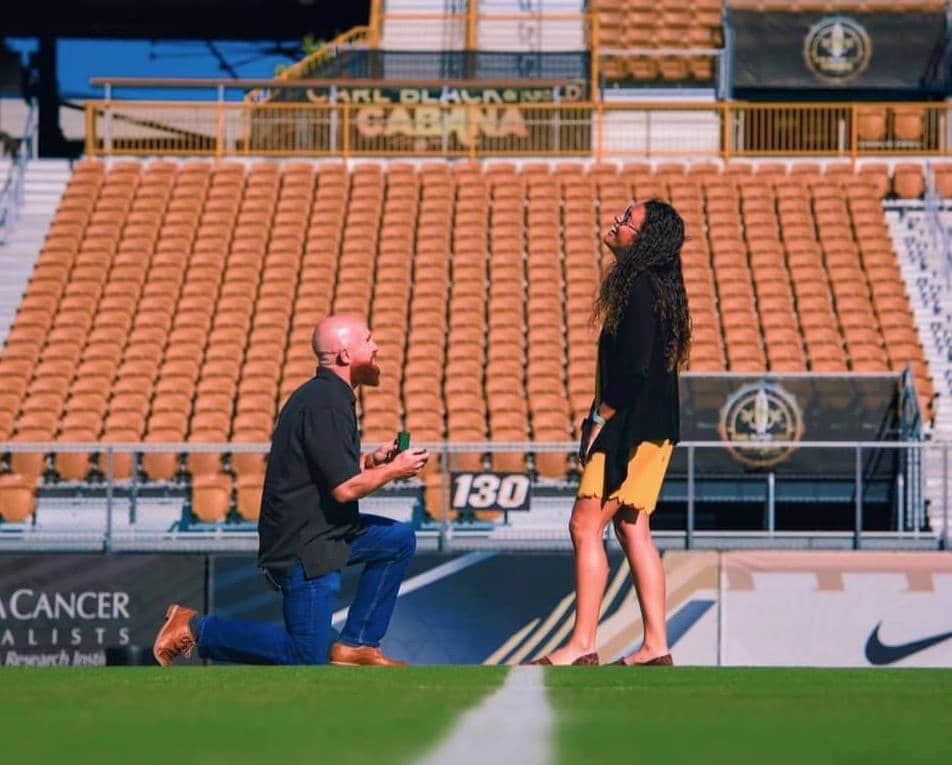 He then opened the gate to the field and says “have fun” and I realized that there is just one person standing on the 50-yard line in the center of the field and it is AJ. I start walking and looking around realizing that there is no one else in the stadium and everything starts to fall into place. I also realized that the distance from the end zone to the 50-yard line is a lot longer than it looks from the stands!

As I got to the center of the field and to AJ I can’t stop smiling as everything unfolds before me. I was in such shock that I honestly don’t remember everything that was said. I have never been so surprised in my life!

After the proposal as we were taking pictures and talking about everything I realized that the battery was never low on the doorbell, he just didn’t want me to see him leaving the house, and that he knew how to turn his location services back on, he just didn’t want me to see where he was going. I still don’t understand how he pulled this off but I am so incredibly lucky!

Walking in and seeing AJ by himself on the 50-yard line of an empty UCF stadium.

We called my parents and my sister and then my best friend since childhood, Stephanie. 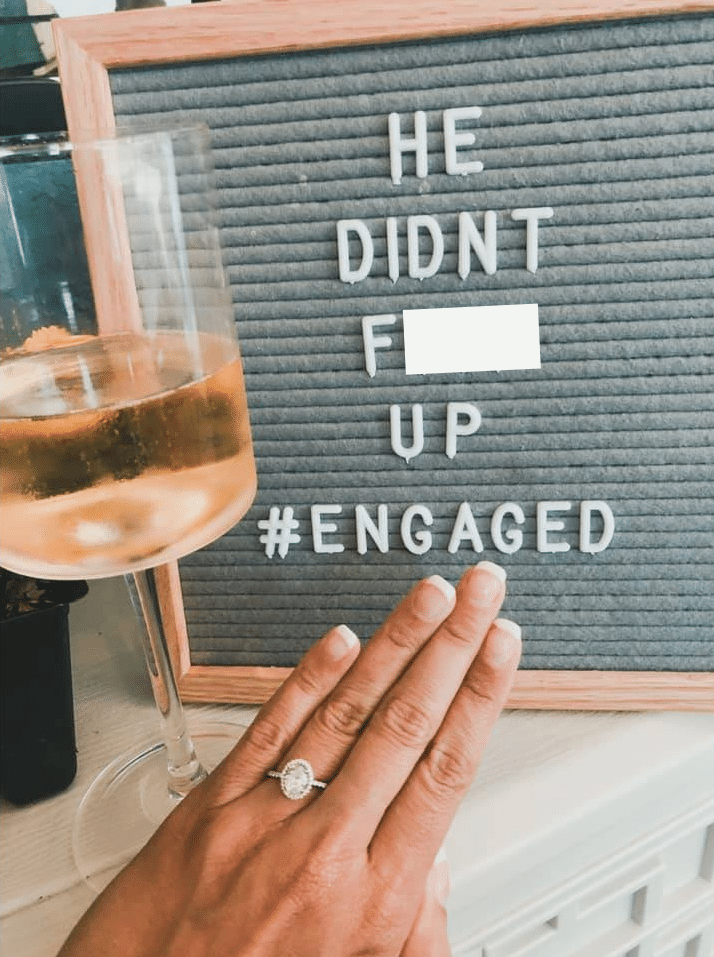 It is an oval diamond with a halo and diamonds on the band. AJ actually sourced the diamond himself and then designed the setting. 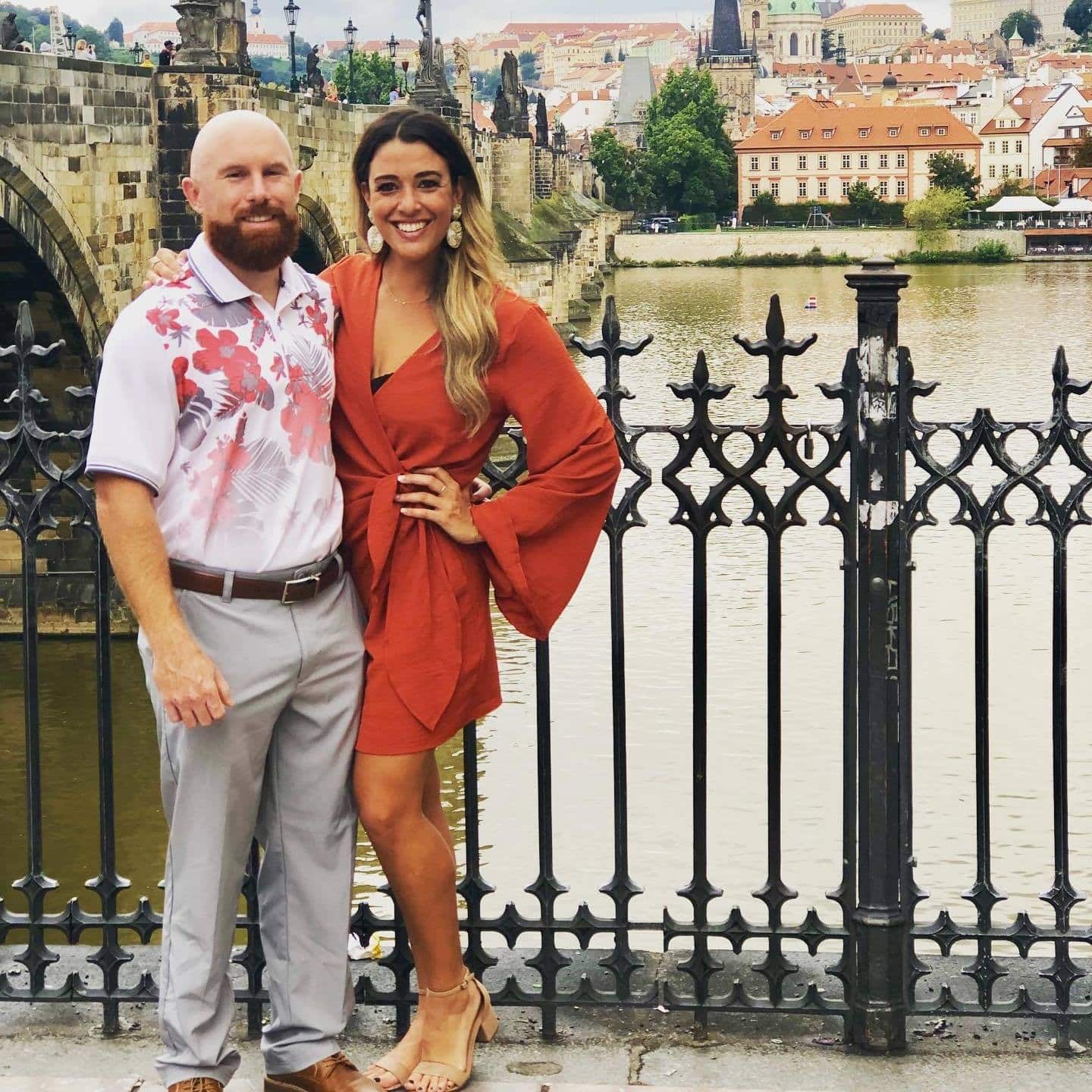 Getting to spend one day surrounded by all of our favorite people who have helped us get to this point. 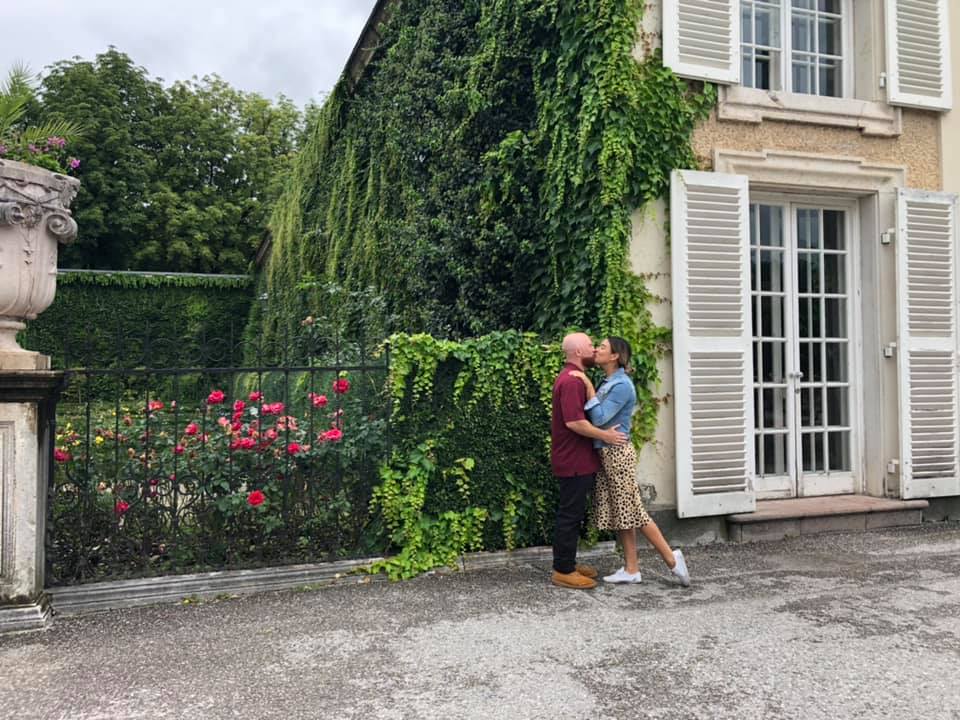 We are looking at Cypress Grove Estate House on New Years’ Eve 2021!

I used to work there and it is where I got to meet Shannon and start my career in the events industry.

We are looking to do a big Gatsby-style wedding with lots of Black and Gold (Go Knights!)